Anki OVERDRIVE: It’s back, it’s better than ever, and it’s going to be the holiday tech toy of the year 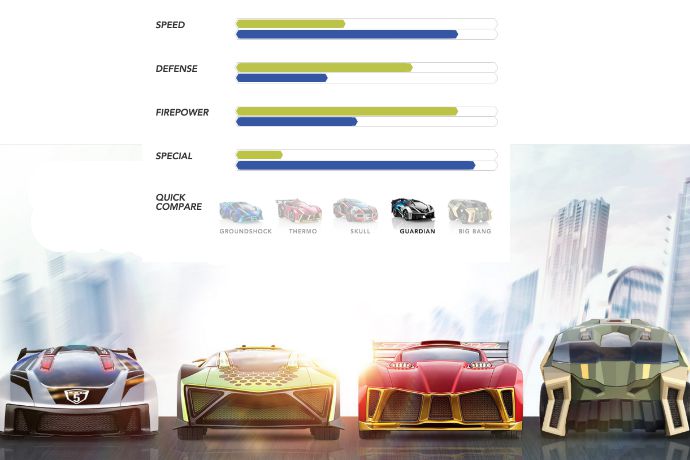 Last year we fell in love with the Anki Drive app-controlled racers, calling it one of our top tech toys of 2014. Earlier this year at Toy Fair, we got a look (and a very fun if brief test drive) of the brand new Anki OVERDRIVE and as of today, it’s here! And this is going to be a hotter toy than even last year’s introduction.

You guys? This is pretty much the best tech toy ever.

The company was kind enough to send us a press review unit so I could spend the weekend testing it out with my kids, and I now have a great first-hand understanding of just why the tech press is going bonkers over the OVERDRIVE (which happens to be a great price at Amazon these days).

The best way to describe it is like the ultimate advanced graphic video arcade racing game into which you pump countless quarters because you want to play forever. You’re choosing your car based on its special skills and weapons, you choose the track, you choose the kind of competition and you choose the competitor. The sound effects are killer and the other characters have well-developed personalities to coach you along or trash talk you. Only with Anki OVERDRIVE, you’re not sitting in front of a screen at all. You’re actually racing real cars around a real track that you design, controlling the whole thing right from your iPhone, iPad or Android device.

Compared with the original Anki DRIVE release last year, which limited the racetrack to an oval on a roll-up matt, the company has smartly evolved to a ten-piece modular track that lets you build up to eight “battlefield” configurations. Or, grab some of the additional track kits specifically designed for speed ramps, jumps (we haven’t gotten that one to work yet), cornering or even collisions.

And this is where I wish I had a whole lot more floor space; though if you can open up a leaf on a dining room table, or clear a decent sized space on the living room floor where you might otherwise be playing Xbox, you should be good. But it will carve out a hefty footprint, so be sure you have the room.

Trust me, you will find yourself saying whoa! and wow! even through the set-up process. It’s mindblowing to watch the AI go to work as cars do an auto test-lap to help the system identify the shape and length of the track for game play and guide you through the process.

The computer characters you can choose to compete against all have their own personalities from helpful to cocky, and skills they will use to trounce you, even while giving you tips for beating them.

Plus, they’re not all dudes. Which is really nice. They’re not even all human!

Watch this test run tutorial I filmed and you’ll get the idea of how amazing this is right out of the box.  Keep in mind my daughter is playing against a computer controlled car (much to her eager sister’s chagrin).

My 8 year-old daughter going through a test lap with tutorial. “Cam” is her robotic opponent.

Each car is unique in terms of speed, firepower, defense mechanisms, and special weapons that are so fun to discover, and make each of the four styles of gameplay more interesting. In fact, while the starter kit includes two cars, Skull and GroundShock, I’d say definitely go ahead and buy more because it’s so fun to play with all four cars, even if actual humans aren’t controlling all of them.

For example, the Guardian racer is a little weaker on defense and firepower, but has very cool battle weapons like a Sonic Blast that penetrates any armor, and a Scramble Mine that detonates to mess up other drivers’ steering abilities temporarily. My kids want me to mention that they are fans of Turbo, which is has more basic weapons, but is super fast for the more traditional speed racing battles.

Click around the supercars page on the Anki site and you’ll get a sense of what they each can do, and the app itself has lots of helpful tips and demos if you need to pause the game to see just what the heck you’re doing.

It gets even more fun when you start alternating among the four different styles of gameplay. You can compete against friends and family (as in, for hours) in four modes including a classic race, battles for points, a time trial, or the really fun King of the Hill which my kids love, because it’s kind of like a game of race car tag. Or — and here’s where remarkably innovative and thoughtful app development comes in — you can enter a tourney against more than two dozen virtual opponents (“elite commanders”) and you keep playing to unlock car upgrades and additional weapons which are, mercifully, free.

So yeah. Like Mad Max. On your living room floor.

Only no insane guy hanging off the front of your grill shooting flame throwers off his guitar. Though I wouldn’t be surprised if that’s coming soon from Anki, the way they’ve been going.

So here’s the parental perspective:

As you can tell from the video above, my eight and ten-year-old daughters picked this up fairly quickly (more quickly than I did, no surprise) and I bet kids as young as six will totally be fine. Yet it’s fantastic for teens and adults too.

I also love that the “weaponry” feels kind of space-age James Bondian cartoony, if that’s a thing. (It is now!) I’m fairly sensitive to ultra-violent games, and this doesn’t feel like one; it’s more like futuristic gladiatorial car racing, or what Anki calls a “battle sport.” Your car may be disabled but no one dies here. I mean come on, even Mario dies.

The charging of the cars is fast and especially if you’ve got impatient kids, that is fantastic. The company claims about 8-10 minutes for a full charge, but it seems even faster than that to me. Plus you can totally play other cars while one is charging, and you get quite a few races out of each charge.

I also find that this works right out of the box. Wow, is the experience seamless and fairly intuitive. The only minor glitch we had is the controller at one point misidentifying one of the cars on the track. Solution: As with all things, try turning the car off and on again. Problem solved.

Above all, I think parents will be pleased that Anki OVERDRIVE will not get old fast, because I hate investing in a game that ends up in the closet after a few weeks. The potential to unlock new powers keeps it fun, and there are so many combos of gameplay with different cars, it’s like a fresh game every time. From what I’ve seen so far, it’s not like you can memorize some pattern to master a level.

Now speaking of investing, this is not a cheap game. No surprise there.

The Anki OVERDRIVE starter kit retails for $149 — or as low as $119 at Amazon — , which is I think a good deal; but in all honesty, while you can add individual bundles, with individual cars running $49 extra each, you want the full monty Speed Bundle which will run you $299. Start saving for holidays now, maybe?

The great news for you early Anki adopters is that it’s backwards compatible with the original DRIVE game. These cars won’t work on that track, but everything you already own will work on the OVERDRIVE track, and I’m sure I’m the only one grateful for that, because I really hate upgrades that make your existing components or controllers obsolete.

On the other hand, my kids are playing with their hand-me-down devices, and the iPad 2 is not compatible even though the OS is up to date. Grrrr. The site doesn’t specify that the iPhone 4S is compatible, but it absolutely is. And of course my iPad Air first gen works just fine.

Now I will say the music can get grating after a while; if you’ve got four full devices going that’s a lot of booming electro-race car soundtrack playing in your living room. Fortunately you can toggle that off in settings.

Considering how absolutely spectacular this is, I do have one more minor complaint: While tons of kids of all ages are going to absolutely adore Anki OVERDRIVE, the only image on the site of actual kids playing the game feature a bunch of teenage boys. While it’s a terrific shot to demonstrate what the full Speed Bundle can look like all hooked up…what, no girls? Let’s get on that, Anki! Speaking from experience, girls will totally love this.

And so will their moms.

Order the Anki OVERDRIVE starter kit and additional bundles from our affiliate Amazon or from the Anki website where you can get more info about how it all works. The apps are free downloads for iOS and Android, and compatible with most recent devices that have iOS 7 or later, or Bluetooth 4.0/Android 4.4.

Thanks so much to the company for sending us a press unit for review consideration. I’m going back for more tracks.