Why parents need a social media policy for babysitters and caregivers, and how to get started 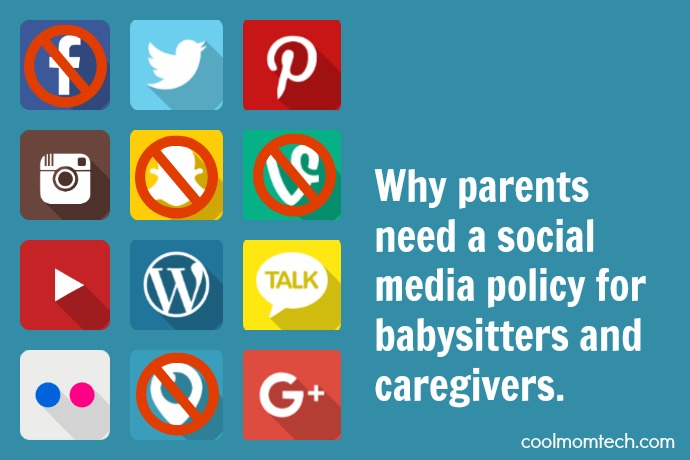 A couple of weeks ago, our friend Heather from the Rookie Moms discovered that her babysitter had been taking photos of her kids on SnapChat and she asked her Facebook friends what they would do about this. Now before you freak about sexting, SnapChat has pretty much grown to become the way teens and young adults communicate digitally. (In fact the Selfie lenses are pretty entertaining and my kids and I play with them all the time.) So, to give the babysitter the benefit of the doubt, my guess is that she was simply sending silly photos to friends.

However, as most of Heather’s friends noted, sharing any photos of someone else’s children is something that caregivers should have permission to do. And this brought up a bigger question for me that I think applies to all parents in this web 2.0 world: Do you have a social media policy for your babysitter or nanny?

(Psst: this includes grandparents, relatives and other caregivers too).

Whether it’s a loose discussion you have upon hiring, or something more formal that you put in writing, I’m a firm believer that it’s important for parents to have a clear sense of what’s cool and what’s not when it comes to their own families.

Here, some considerations for creating your own social media policy when your children are in the care of someone else.

1. To friend or not to friend (your sitter). That is the question.

Considering we live in a social media world, it’s safe to assume that your babysitter or nanny is on a social media network of some kind; Facebook and Instagram would be the most common, with SnapChat a strong likelihood for teens and the twenty-something set.

But just because they’re on there and you’re on there, doesn’t necessarily mean you need to be “friends.”

As for me, I’m a very public person with public social media profiles. Other than getting some of my friends-only Facebook updates (which generally include photos of my kids), I’m not sure why any sitter would want to be my social media friend.

On the other side of it, befriending my sitters and nannies does give me access to their public or friends-only updates and posts (with the exception of SnapChat which is notoriously hard to police), and then I’ll have at least some ability to check in and see what they’re doing when they’re with my kids. And hopefully, that doesn’t include chatting on Facebook when they’re supposed to be at the park with my kids.

I still believe in personal lives, and so honestly, I don’t initiate a social media connection with my caregivers. I’m fine not knowing every single thing about their lives, and I trust that they’re following my rules when it comes to sharing photos of my own children.

2. Photo and video sharing: The guidelines to set.

If you’re like me, you love when a sitter or grandparent texts you photos of your kids when you’re away. It always makes me feel better to see them smiling and having a great time. But photos shared and possibly tagged on Facebook? With my kids’ full names? On a public post? With location settings on?

There are other social networks that photos can end up as well, like Instagram, SnapChat, Flickr and beyond. And while yes, those SnapChat photos disappear after 15 seconds, it’s been proven over and over again that screenshots can still be taken and saved. So I would specify that even Snapchat or texting images to people other than me are off-limits.

And if you’re totally in the dark about SnapChat, please read up on it! Make sure you check out SnapChat’s Safety Center…and your caregiver does too. Especially the SnapChat Parents Guide (PDF).

I don’t believe that babysitters or nannies have ill intentions. We just happen to be part of a society that tends toward oversharing right now; revealing the ins and outs of your daily life has become the norm, and it’s likely that your sitter is simply proud of her charges. That’s actually a lovely thing! However you’re entitled as the parent to determine that your caregiver not share photos of your kids, even with friends. Or, maybe only with friends. Or, maybe on an Instagram account, only without names. Really, it’s entirely your call.

If you are okay with some social sharing, then create specific guidelines for tagging and other personal identification.

Also, consider who else might be in the photo. If you’re okay with a grandparent or caregiver sharing some cute pics of your kids on a playdate, they still should seek permission from the parents of other kids who might be visible.

As you probably already know, there are lots of ways for people to find you via social media, and in many cases, those location sharing settings can be handy. Like, when you’re on vacation and you want to show off a little by tagging That Fabulous Restaurant On This Sunny Beach. Or, you want to connect with other friends and followers who may be nearby.

But when my sitter is with my kids, there’s no reason for them to check-in, on Facebook for example, when they’ve arrived at a specific destination with my kids. Tweets about how much fun they’re having with the kids — even with no photos — might be something you don’t want attached to a location.

In fact, they may be posting locations without even knowing about it. Check out Facebook location privacy for more info, though each app has its own settings.

The way I see it, if I need to know where my caregiver is with my kids, she can text or call instead of announcing it publically. Or if you’re both iPhone users, you can ask them to share their location. (Settings > Privacy > Location Service > Share My Location) This way, they don’t even need to have their phone out and in their hand, so their attention and focus can be on the kids.

Just know that they may be sharing location with others as well, if they’ve added them to their list.

CNET has recently done a great post on 4 safe ways to share location, plus a list of carrier-branded apps. One of our favorites that they recommend is Glympse for iOS and Android, which gives you plenty of manual control over real-time location sharing and tracking.

Maybe you don’t want photos of your kids at an easily identifiable landmark, a local playground, or right in front of their school entrance. Now honestly, we don’t tend to be alarmist about this kind of thing (the likelihood that a stranger will track your kid to a particular park through a photo is pretty much zero to none) but for those of you with concerns, it’s still smart to set clear rules.

Ask yourself: Do you want the location of your kids to be published on social media sites? Does it matter if it’s shared with friends only? Do you want your caregivers sharing locations while with your children, even if your children are not in any photos?

4. Know that some apps are more social than you think.

A few weeks ago a family member of Liz’s innocently hared a photo of Liz’s girls with friends Facebook using a cool new app that turns photos into funky images. We checked it out right away because it was so great looking!

Turns out, this particular app is not like Brushstroke or Waterlogue, apps that edit your photo right on your own device; instead, it renders it using their servers, then auto-shares on a community forum. That means that cute photo of your kids — even if made less identifiable with art filters — are now in other people’s hands.

None of us can stay ahead of every single app that every single person in our lives might be using. But it’s good to keep in minds (without getting too paranoid!) that there are apps that seem relatively benign, but actually open up your information and content to more people than you’d expect.

Ask yourself: Have you read the Terms of Service on apps before you start using them? If your caregiver is using an app you don’t know, have you checked it out to see what it is?

Just sit down and take a few moments to figure out your level of comfort when it comes to social media use with caregivers, grandparents, tutors, coaches — basically anyone watching your kids.

Perhaps you’re okay if they’re sharing photos on Facebook to friends only. Maybe you want to keep a strict no-social media of my kids at all policy. Maybe you don’t even want them sharing pictures with friends via text. There’s no right or wrong answer; it’s entirely up to you.

What is important is that you be able to think carefully about your boundaries and put them into words, so you can have an honest discussion with your caregiver. Ideally, right up front, before any situation has a chance to get awkward.