The TBH app: What parents should know about this hot new app for kids 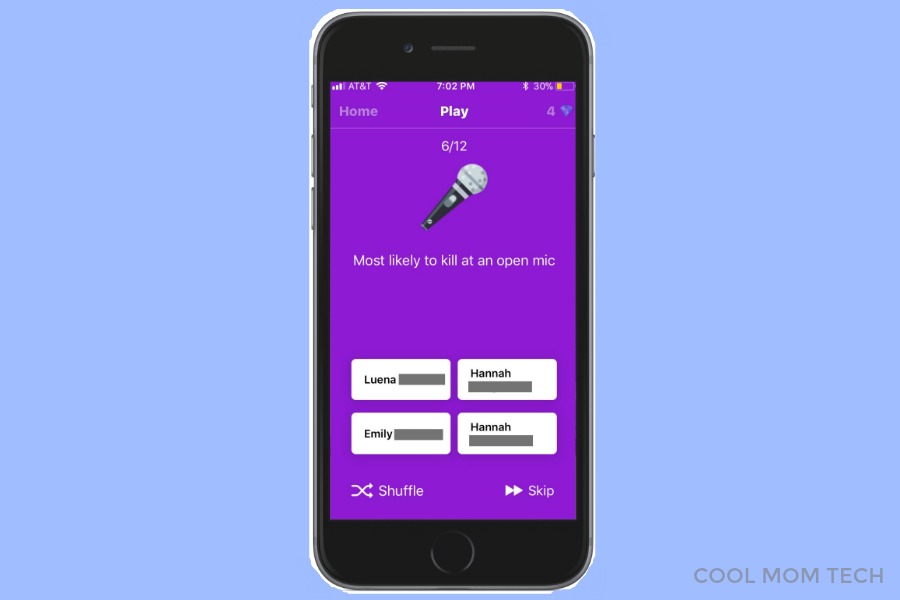 The TBH app has been blowing up over the past few weeks and just hit #1 in the App Store for iOS following the announcement that Facebook has purchased it. I’ve seen multiple articles referring to it a “kindness app” or an “anonymous compliment app” which sounds pretty appealing, right? In fact, my own daughter asked to download it two weeks ago.

Then, she promptly deleted it.

Here’s why she did — and what you should know if you’re wondering whether your kids should be on the TBH app.

What is the TBH app?

As a user, you receive a series of multiple-choice polls about your friends — the app knows your friends because you’ve given permission to access your address book — and the possible answers consist of four random friends’ names. 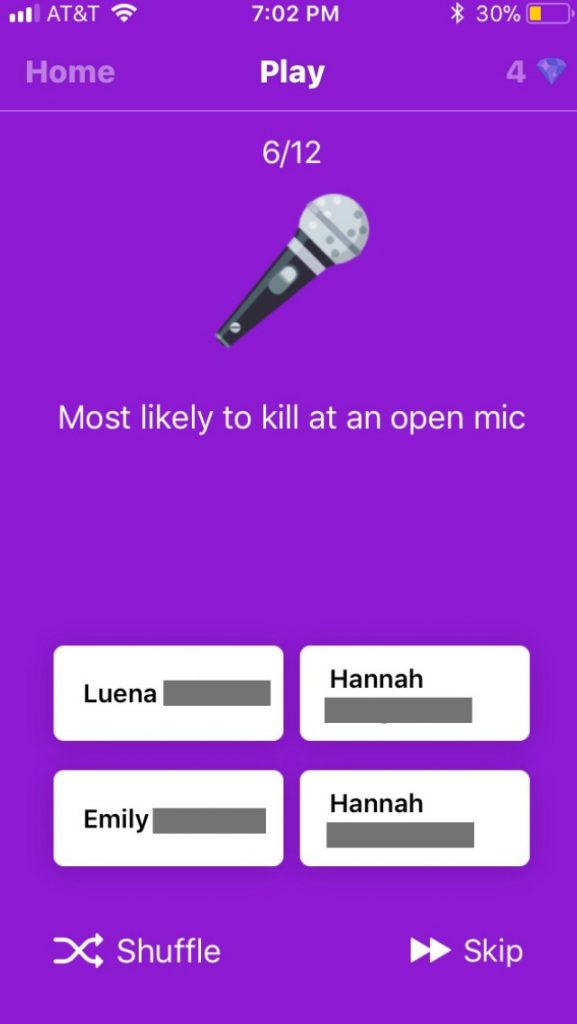 The original idea was about kindness and positivity, which is kind of sweet. Early users were answering questions like “Most likely to kill it at an open mic,”  “Could actually become a philosopher” or “I would read their autobiography” — and the chosen friend would get a notification about their new accolade complete with a gem icon.

You track the number of gems earned, which will reportedly unlock more options for you down the road.

You can’t create your own questions, though you can submit suggestions or skip questions you don’t like as you cycle through the 15 (formerly 12) series of polls.

You can also click through your network notifications and see which polls your friends have earned gems for.

The app is rated for kids 13+ but judging from our local middle school and upper elementary, it’s got plenty of appeal to tweens as well.

You can’t use the app without providing information to the developer. That makes me more than a little uncomfortable, especially considering this is…for kids. It’s currently not available everywhere in the US, which I believe has to do with noncompliance issues for minors and apps.

I’ve seen articles that state that first-time users must select their grade and identify their school, with the premise that you can connect to your school network this way. That is not particularly cool by me.

However, my daughter was asked for her grade only —  so it’s possible that reporters who haven’t used the app themselves are regurgitating old info from earlier versions of TBH that required school ID.

To be clear: There are no privacy settings at all. That would defeat the purpose of answering questions about your network of contacts. Though you are working within a closed network of friends you presumably already know. With one exception:

Anyone can search the entire user database by username and conceivably add your child, though your child will need to approve the request (as with a private Instagram account.)

The only other info you’re asked is whether you’re a boy, girl or nonbinary — which is actually kind of cool.

How TBH has changed

Even within the first week of using the app, we could quickly see how it was evolving. As if the company was running out of “nice” questions to ask, less overtly positive started popping up.

Now we’re seeing questions like “Wouldn’t be surprised if they drop their phone in the toilet” or “Most likely to forget homework” — which might be funny if you’re sitting around a table with real friends, but definitely lead to misunderstandings and hurt feelings. 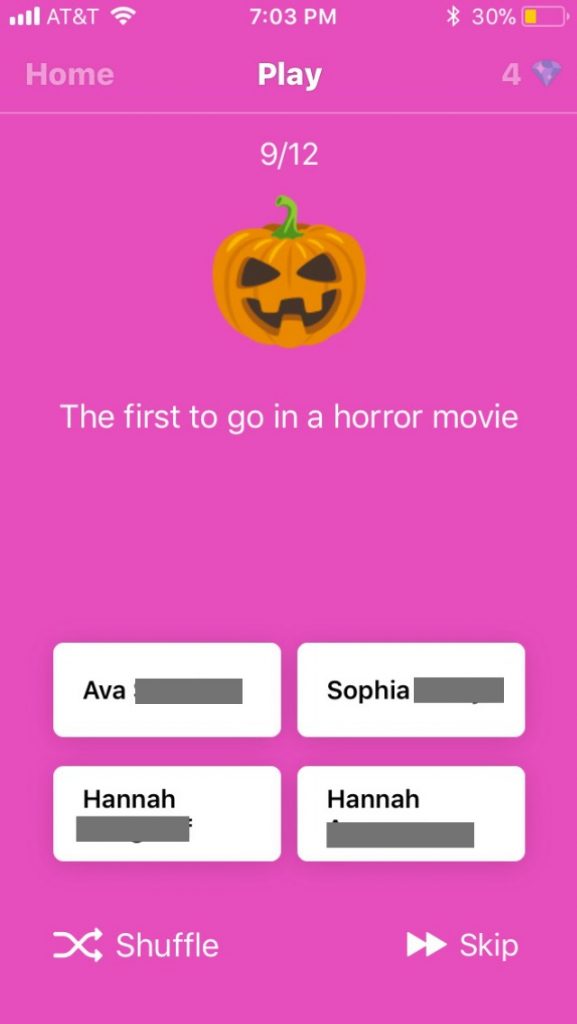 My daughter had to ask me what it meant when it said, “The first to go in a horror movie” — and I had the joy of explaining that as far as Hollywood clichés go, that means usually the overweight kid or the couple having sex in the camp cabin. So, yeah. That was a fun conversation. Fortunately, she skipped that poll and moved on.

We’ve also seen polls along the lines of, “Thinks they’re cooler than they are.”

Not a fan of that one.

I get that the edgier questions are likely to make the app more fun and more sticky for users, so no doubt Facebook’s sale will push in that direction —  but I’m wondering how long until we start seeing, “Will be ditched at the prom.”

Well, yes and no. You can see whether the accolade comes from a boy or a girl if the friend wants that info known. If you’re only friends with a couple of boys, for example, and you get a notification from a boy…process of elimination.

You can also pretty much narrow down the suspects depending on the size of your network. For younger kids who may only have a couple dozen friends in their contacts, this can be pretty easy. My daughter could tell quickly, “oh, that’s probably from my camp friend M because the other three options are all kids from camp” or, “that’s definitely from G, because he’s the only boy I know who’s got so-and-so in his address book and he was one of the other options in the poll.”

But there’s another feature that was just added this week: The ability to DM. And here’s where things get tricky.

For example, you get a notification that you are “Likely to fall asleep in math class” and you can respond if you want — though you don’t know to whom you’re writing.

At that point, the friend can ignore it and keep you hanging. Or they can choose to “reveal” themselves by writing back to you.

I imagine that chat capabilities aren’t far behind. And really, just what our kids need — another chat app. (Eyeroll emoji.)

Opportunities for bullying or harassment.

If there’s a way to misuse an app, leave it to kids to ferret it out. I can already see how TBH is being used for reasons other than “anonymous compliments.”

First of all, when you DM, you can say whatever you want. Like, “FU for writing that about me,” for example.

Also, because you can skip questions, I’ve heard about some kids scrolling through them until they get to the edgier questions, then bombing one kid with multiple notifications at once.

It’s one thing to get an alert that someone thinks you’re most likely to get a star on the Hollywood Walk of Fame,  but another to see four or six or ten notifications in a row with judgments about you that aren’t as kind.

Then there’s this: you can scroll through your friends list and see their notifications. 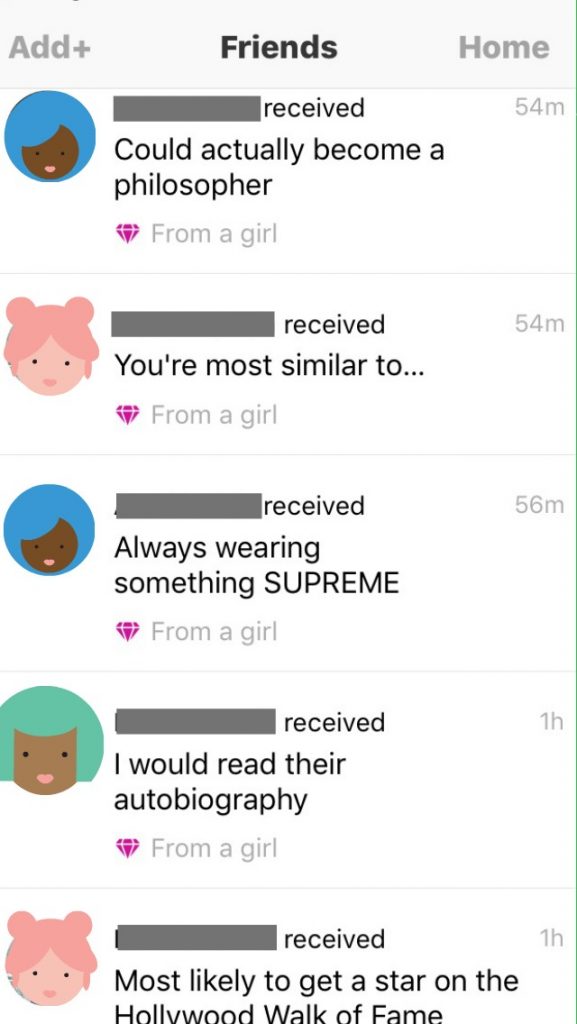 That may be nice if everyone is earning a lot of gems in your circle — but if one child sees that they are being left out, or haven’t been “chosen” for as many positive responses, it’s kind of like being the kid in the classroom on Valentine’s Day who doesn’t get any cards.

Kids notice that stuff. Actually, adults do too.

Bottom line: TBH is a useless time suck with no redeeming value.

The initial premise of TBH — giving random compliments to friends —  is a terrific one, which is why I originally approved its download. I’m sure it was well-intended by the developers. But the privacy concerns, which increase for me now with Facebook’s involvement, and the evolution of the app’s features definitely make my needle jump.

I try to give the benefit of the doubt to social apps, but I just don’t think there’s any redeeming value in this app as it stands now that justifies its use. I mean, I’m not a big Snapchat fan, but I can certainly see the appeal and utility besides selfie overlays. 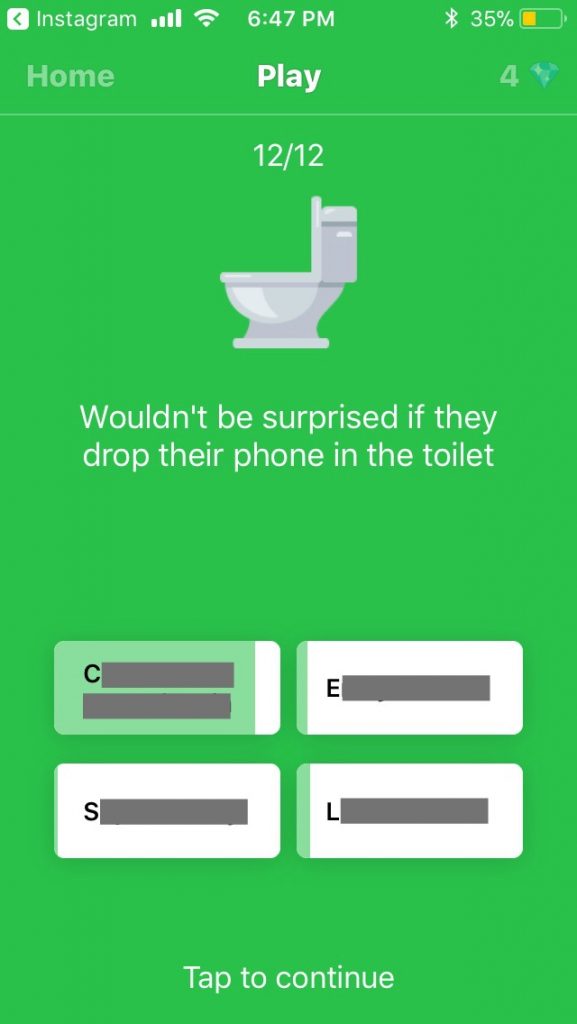 So, call me an old boring parent. But as someone already pretty conscious about how much my kids are on devices, I wouldn’t consider this a beneficial way for them to spend their screen time.

What it really comes down to is that TBH is an app that’s all about judging and being judged. Like a junior version of Hot or Not. (I know, I’m dating myself!)

That kind of feedback can be addictive, so that kids are constantly refreshing, hoping to see something nice about them. Or — something not so nice. Which really serves no purpose at all.

I would say if your kid is begging you to use the TBH app because everyone else in school is (that’s how these things go, and why Facebook sees the possibilities), you set it up along with them and keep checking in on it. As with any new social app they may want to use.

On the plus side…

Truthfully, as the app stands now, I imagine your kid’s interest is likely to fade quickly. At least it was in the case of my daughter who deleted it on her own accord, and sees a lot of her friends doing the same.

“It’s just kind of stupid,” she told me.

I guess she figures if she wants to say something nice to a friend, she can do it the old fashioned way: with Instagram direct messages.

Or you know, in person. That works too.

Find the TBH app in the App Store. It’s currently available for iOS only in select states.