R2D2 transports your precious data. Well, him or Hello Kitty. 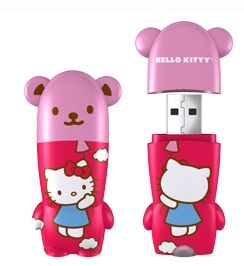 There are a quite a few phrases I never thought I’d utter in my lifetime. “Please don’t put that in your sister’s underwear” and “I’m unfollowing Charlie Sheen” top the list this week.

Another to add to the list: “Designer flash drive.” And yet that’s just what’s caught my eye recently. Fortunately they’re less designer designer and more graphic designer because really, I’m not ready for a $600 Stella McCartney flash drive just yet.

Check out the Mimobot site and find flash drives so fun, if you’re like me, you’ll start to fabricate reasons that you need them. My girls are already begging for the Hello Kitty flash drives despite the fact that they have no idea what a flash drive even is. They’d probably have a hard time picking between that and the Star Wars drives. Though I should keep them away from Han Solo, “smuggler of exotic spices and princesses’ hearts.”

I’m thinking it would be so cool for a kid’s birthday party–instead of a goodie bag, after the party send out these little drives with party pics on them.

Don’t just limit yourself to browsing the licensed merch. Check out the fun community-designed flash drives (I love Marvin the Pirate. Marvin!) and collaborations with artists like Gary Baseman and Tokidoki. You can grab an optional keychain too. Way cooler than that blue rabbit’s foot I walked around with in third grade. –Liz