Stack the States and test your geography smarts 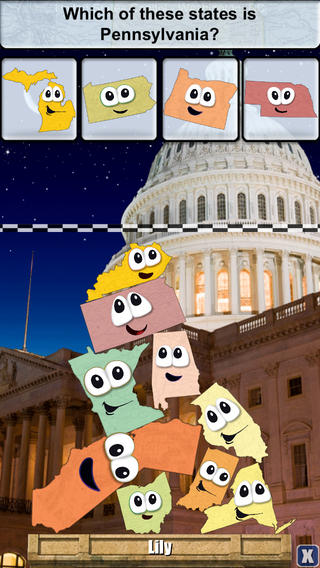 Ever since he was a little guy, my six year old has been obsessed with maps, so it was a no-brainer that I’d look for fun apps that capitalize (ha, get it?) on his obsession.

What I didn’t expect was to find an app that I’d want to play whenever I have a free minute too. Hey, you’re never too old to learn which states border on Montana, right?

The main premise of the fun educational app Stack the States is pretty basic: answer questions like Which state has the nickname “The Buckeye State”? by choosing among four states. Get a correct answer, and your state drops down. The goal is to stack your states until your tower crosses the finish line, allowing you to unlock other games.

The graphics are really clear on my iPad2, and don’t seem too juvenile for kids old enough to read and play. As for me, I do great on the questions; it’s the stacking this physics-adverse adult has trouble with because even though I can move the states around to make them more stackable, give me a few ragged-edge states and my pile is likely to topple over the edge.

This is a really neat way for the kids (and me) to learn not only facts about the states, but their shape and size: Finally Alaska gets its due after being shrunk on every U.S. map I’ve ever seen. -Christina

Get the latest version of Stack the States for iPad or iPhone at iTunes. If you want more of a challenge, check out Stack the Countries too, but I’m warning you: This is a toughie.

UPDATE July 2013: Stack the States for Android is now available through Amazon. Whoo!