Teaching the US presidents with the help of aliens 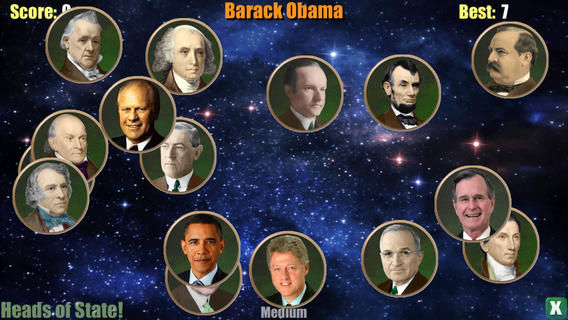 Most of us know that George Washington was the first president and Al Gore was never one, but there are a whole lot of years in the middle there that are not my strong suit. That’s why I love a new app that helps my kids and me brush up on our U.S. history in an entertaining way.

Oh, and it involves knocking a bunch of aliens around–which has nothing to do with U.S. history, but is oh so much fun.

Presidents vs. Aliens is essentially a multiple choice game about all things presidential: Nicknames, Facts, Who Preceded Whom. In other words: Whoa, it’s been a long time since I studied U.S. History.

Thank goodness some of the questions get repeated so I get a second shot at getting it right.

When I do get a question correct, I can then fling the president’s head at a bunch of alien images with the goal of knocking the aliens out of the picture. Clear the screen of aliens and I’ll win a president. Created by the same developer of Stack the States, you may recognize some of the sound effects and general set up of the game, but you don’t need to play one to understand the other.

This is not a game for young kids who may get frustrated by the difficulty of questions, but if you have a smart school-aged kid, I bet they’ll do just fine. Win enough presidents and you’ll even unlock more games. I’d tell you what those are like, but I haven’t won enough games. Looks like it’s time for someone to do a little studying. –Christina

Download Presidents vs. Aliens for both iPhone and iPad. And see our review of Stack the States.