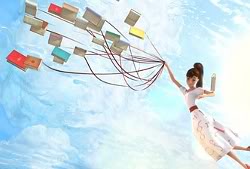 Jeremy Bernstein is a digital creative director at Deutsch Advertising in New York, so he’s always up on the latest and coolest. He’s also the father of two ridiculously cute kids.

It’s a common refrain in our home since we got an iPad a few months — “can we please unload something new?” Our four year old daughter Eloise seems to churn through apps about as quickly as yogurt squeezers.

So it was with some hesitation that I plunked down $4.99 (a relative fortune in app dollars) for The Fantastic Flying Books of Mr. Morris Lessmore.

I am happy to report it was well worth it. An interactive, animated storybook created By William Joyce, a former Pixar designer, and his team at Moonbot Studios, The Fantastic Flying Books of Mr. Morris Lessmore is beautifully illustrated and the story is sweet. But it’s the playful interactivity that makes it great.

Every page has a discoverable element that you can play with. On one page you open the door to let Morris out of his house. On another you’re coached through a lesson on the piano. And on another you spell out messages with alphabet cereal.

The story is fun, but it’s these well designed and playful diversions that bring us back to the app over and over again.

Sometimes I go through the story with her, and sometimes she goes through on her own — at times spending ten minutes on one page interacting with the story. Come to think of it, I don’t think I’ve been asked to “unload” anything since we met Mr. Lessmore. –Jeremy

Read all about Mr. Lessmore’s flying books at MorrisLessmore.com or download the Fantastic Flying Books iPad app directly from iTunes.