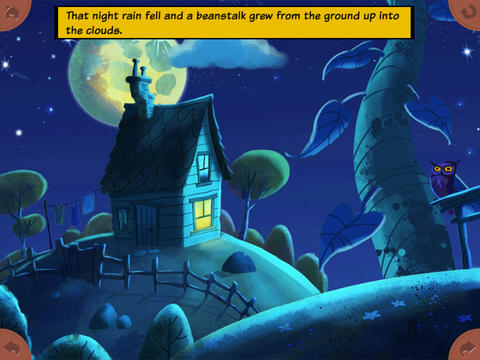 Though I was raised on the original Brothers Grimm stories, which are pretty dark, I was always a little more scared of the story of Jack and the Beanstalk.

The whole I smell the blood of an Englishman boomed by a big hairy giant? Yeesh.

But now we’re having so much fun trying out a new app that brings Jack and the Beanstalk to cartoony life in a fun, not-too-scary way, it’s making this mama happy too.

Though the story isn’t new, what makes the Jack and the Beanstalk ebook app so great is how it has been interpreted for the touch screen tablet. Along with the read-to-me or read-by-myself text, this entire app begs kids to tap, touch and tilt to unlock the little secrets on each page.

I’ve tested it on the iPad which seems like the ideal format for viewing since there is a lot of detail on each page, though iPhone users may still get a lot out of it as well.

There’s plenty to keep preschoolers smiling, and even my older kids get a kick out of clever features like needing to open the window before Jack’s mother throws out the beans, else the animated beans bounce off the window and back into her hand. And my son loves playing the little mini-activity in the middle of the story where you can outfit Jack for his big climb–from superhero garb, to a Little Bo Peep outfit. I wish this costume would carry through the rest of the story though; my son really wants to see Bo Peep battle the giant.

For the (very) few dollars, this game is absolutely worth the purchase for the amount of fun my kids are having. As for me, I’m no longer freaked out by that carnivorous giant. –Christina

Check out Jack and the Beanstalk ebook app for the iPad and iPhone at iTunes from Mindshapes, the same folks whose Jellytoons we discovered earlier this year. Keep an eye on them for more great apps, guaranteed.