A welcome twist on the ABC iPad app 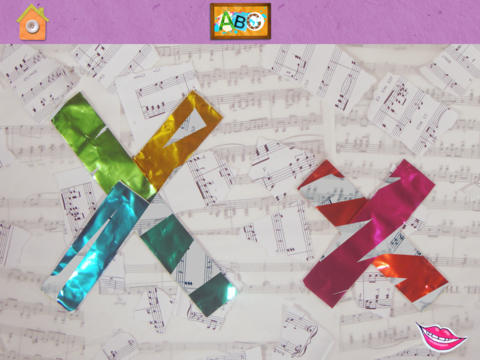 Just when I thought it wasn’t possible to do something new and exciting to an alphabet app, I discover this amazingly creative ABC app that has my little kids mesmerized–and learning too.

The VivaKids’ ABC app for iPad features the creations of artist and author Ulrike Kerber, brought to life with super cool animation. If you can get past the odd home screen that’s got a note from the artist and information about their other products, you’ll be more than thrilled with the app itself.

Each letter features a short animated video that’s made using every day objects, like an animated wave for “W” that’s created from various colored paper and plastic. It’s really unlike anything you or your toddlers have ever seen. I love that aside from the different representations for each letter (yes, “V” is for “Volcano” too, not just violin), there’s an added screen for kids to trace each capital and lowercase letter using their finger.

At $2.99, it might be a little higher than you’d think to pay for an alphabet app, but the amount of time my own little kiddos have spent playing with the VivaKids ABC app has been totally worth it. -Kristen