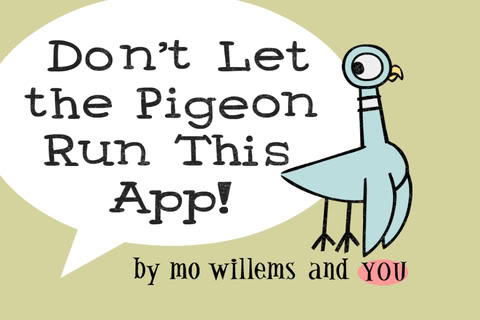 You might be thinking, geez, what took him so long? when you first get wind of Mo Willems’ delightful new interactive ebook, Don’t Let the Pigeon Run this App. But after hearing him preempt that very question at a recent press lunch, I totally understand what took him so long: The pursuit of quality. Entertainment value. Creative potential. Humor. An app that requires your own engagement for it to “do” anything.

Essentially, all the stuff worth waiting three years for.

If you’re not familiar with Willems’ Pigeon series of books, you’re either a brand new mom or you’re a recent immigrant from Moldavia. Count my kids among the Pigeon obsessed (a population that’s twice as dense in Brooklyn), thanks in part to the interactive nature of the stories. As he describes it, “I don’t write books for kids, I write for people who haven’t yet learned how to be embarrassed.”

The pigeon app is no different. Here, the essence of the books come to life beautifully and dynamically with a pigeon drawing tutorial (introduced with a video from Mo himself), and three different hilarious book-creation options for varying levels.

In “Egg,” the youngest kids can listen to any number of Pigeon stories (Don’t Let the Pigeon Operate a Catapult, for example) which become new each time with some basic noun changes. “Chick” allows preschoolers can create their own Pigeon story, multiple choice style–you just might find a Piggy and Elephant cameo in there. Slightly older kids ( my 4 and 6 year-olds are perfect) will love “Big Pigeon,” a voice-activated interactive storybook that they help create, Mad Lib style. There’s nothing like seeing your kid’s face as her fart and underwear jokes become validated as a part of the pigeon’s story.

Mo’s goal with this app was to give kids the tools and motivation to become their own authors and illustrators, which is just the kind of children’s app that iPads were made for. Even the homescreen credits read: By Mo Willems and You.

Technically, there are couple of teeny first gen annoyances–like to go home, you have to click the birdhouse, followed by a second click on the talk bubble that emerges and says “go home.” The second click is counterintuitive for kids these days who are being raised on apps. You also need to make sure to tap the big red button before you answer an audio prompt and not after; that’s not entirely clear.

But overall, this app is a winner. My kids have not stopped playing with it for three straight days, if that’s any indication.

I love that you really feel the author’s fingerprints all over it–Disney Interactive Publishing calls
it their first author-driven e-book, and it’s such a nice change from all those licensed books with dubious educational value. Willems wrote script himself and stayed incredibly involved with the production and execution right down to the Pigeon’s voice, which is his own.

In fact this app is so personal to the author, that he joked to me, “if you hate this app then you hate me.” Not possible. –Liz

Don’t Let the Pigeon Run this App is available from the iTunes store for iPad and iPhone for $6.99. Sorry, no Android yet.  Learn more about Mo Willems and all his characters at PigeonPresents.com