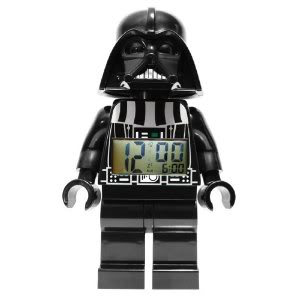 Alarms? Waking up early? A Jedi craves not these things. But your little Padawan might crave an alarm clock melding their favorite Star Wars character minifigures and Lego.

It’s always Darth o’ clock with this detailed Lego Star Wars Darth Vader minifigure clock. Standing at nine inches tall, he’s just perfect for Star Wars fans of all ages. He’s got a backlit red LCD display, alarm and snooze functions, and the same poseability you see in Lego minifigures, including the ability to hold things in his hands.

According to the reviews, his alarm is simple enough for even young padawans to get up in time for some blue milk before catching the bus to the Jedi Academy. And it comes with 2 AAA batteries, which thankfully isn’t enough juice to generate force lightning.

It should be noted that his alarm is a simple beep, not the creepy Darth Vader breathing noises we secretly hoped for.

You can get your Darth Vader clock, Stormtrooper clock, Yoda clock (Ready
to wake up, are you?), or my favorite, Boba Fett, from the Lego Shop or from our affiliate, Amazon.