Kinect Star Wars – The force is with you, or at least in your left hand 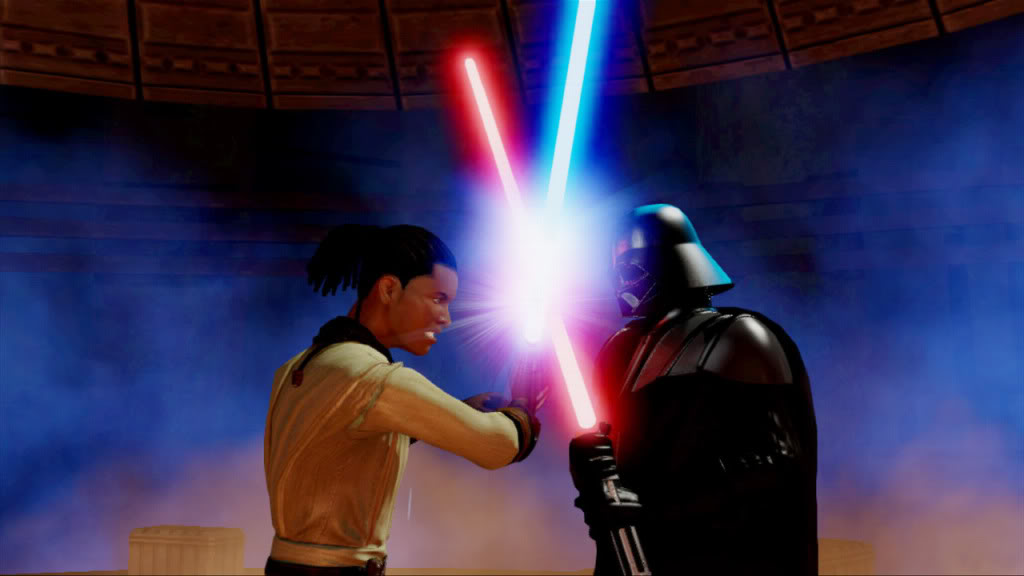 My boys and I can’t watch Star Wars movies without afterward pretending to be Jedis, using sticks as light sabers and our voices for sound effects. Sound familiar? So last week when I had a chance to review the new Kinect Star Wars game at a press demo, I knew that the galaxy far far away would make a huge splash right in my living room, with controller free, full body motion force.

next month, if not new life to the galaxies.

The game play types include space combat, flight, speeder bikes,
land speeders and my favorite, the light saber combat. Check out the Kinect Star Wars trailer on the Lucas Arts website if you want to get excited.

The Kinect allows you to interactive with the game by using your right
hand as the light saber while your left hand yields “the force”–pretty
cool.

There are different tracks and planets that offer new options for
unlocking as you progress through the game. And I like that two people
can play at the same time, with the second player having the ability to
jump in at any time, saving a whole lot of sibling skirmishes. And for
those of you worried that your little Jedis will never come when called
for dinner, assure them that the Kinect auto sign-in recognizes profiles
to allow players to leave the game and then come back where they left
off.

The game’s ERSB rating is T for Teen,
but there is no blood or gore–just “dueling” which I suppose
constitutes mild violence. I had no issues at all with my 9 year-old
twins in the game, but younger
kids afraid of monsters may want to stay away from Rancor, or may prefer

seeing C3PO then watching a suggestive version of Princess Leia dancing
for Jabba the Hut.

(I have a feeling that Princess Leia has already been an active part of many older Star Wars fans’ imagination for years.)

As for my tween, who sometimes needs to let off steam after a tough day
of school, there’s a game called Monster Rancor Rampage. Rancor escapes
into town causing havoc as he stomps, throws and destroys everything in
his path–giving the player the chance to take advantage of full body
motion so your own little monsters can feel big and only create havoc on
the screen.

But hey, there’s also dancing. Which all of my sons would enjoy. And lets face it–me too.  -Beth

Kinect Star Wars will be available April 3, 2012 for $49.99, but can be pre-ordered at sites including  our affiliate Amazon. To make the set complete, the Xbox Star Wars bundles will also be available in April.