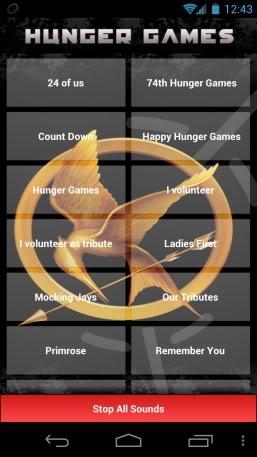 My kids may be too young to go to a PG-13 movie on their own, but that doesn’t mean they aren’t as obsessed with The Hunger Games as the rest of the world these days. And while they’re already reenacting their favorite scenes from the book in our backyard, I’ve found a brand new app that lets them take it digital, with a game that’s already keeping them glued to my iPhone.

The new, just-out-of-Beta Hunger Games-based app for kids, Top Tribute, from French developer Poisson, is a muttation of sorts, combining the social interactions of a SIMS game with the “fight to the death” aspects of Mortal Kombat.

Yes, it’s violent. But of course, it’s only a game.

This is one my kids loved from the moment they created their character—complete with their own face from an uploaded photo. (Very cool touch.) After inviting all of their friends to play along, the games were on. They found it exhilarating to choose their weapons from the Cornucopia while still trying to stay alive. My nine year old daughter went right for Katniss’ bow-and-arrow (of course) while my seven year old son opted for Rue’s slingshot.

Unfortunately he was out of the game and covered in flowers a little quickly–it is a bit tough for a seven year-old to get the hang of the strategy, although the interface is fairly intuitive.

When they aren’t trying to find water to avoid dehydration, or trying to outrun those nasty tracker jackers, hop onto the interactive message boards that you can access directly from the app, to chat with friends and meet other kids playing from all over the world. Now I would warn you that the language here can get quite coarse, and I’m not convinced everyone here is a child, but more mature second or third graders should be able to handle themselves provided they’re strong readers.
If I had one complaint, it’d be that as in the “real” Hunger Games, there is no downtime. In other words, you may find your 8 year-old checking his status at 2 AM or trying to blow up his friend instead of doing his homework. But, just think: After a couple of months of play, the cut-throat world of middle school will seem like a piece of cake. –Christina
Download the Top Tribute Hunger Games app, rated for kids 6+, for iOS and Android.  May the odds be ever in your children’s favor!