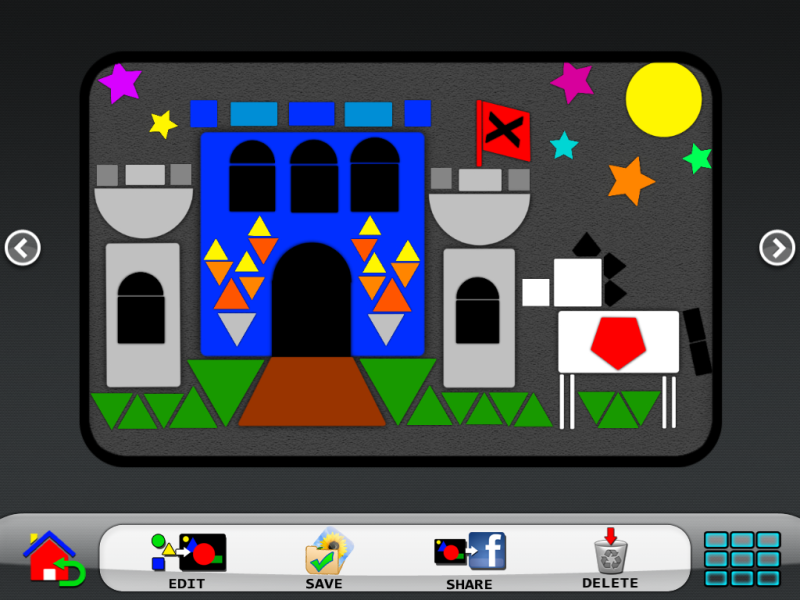 As a huge Colorforms fan as a kid (really, who wasn’t?) I squealed when I learned they had turned that clever little design and creativity toy into an iPad app. And what an app it is.

The Colorforms Revolution App
(wow, mighty big promise there) is developed around the same basics as
the original colorforms, but with lots more ways to play with it. There
is a lot to do here with both easy and hard levels, so both my
preschoolers and my nearly seven-year old are fighting for a turn.
That’s a win, in a way.

There are playsets that remind you of the ones you might have had as a
kid, puzzle boards to allow kids to make scenes out of basic shapes,
existing boards to edit and change, and even a “create” board to let
kids make their own shapes in the sizes and colors they like, then place
them as they will. That’s pretty cool. There’s also some crazy animated
“go wild” board, which I can’t entirely figure out just yet but my kids
seem to like it.

The nav is fairly simple and intuitive (my just-turned five-year-old
didn’t need my help) and of course, kids will love being able to save
their work.

While I am never getting rid of our actual
Colorforms, I love that we have another terrific digital option for
taking it on the road–and without losing the little vinyl pieces. Grab
this app. It’s awesome. –Liz

Find the The Colorforms Revolution App for iOS, and in HD for the iPad for $2.99, $1.99 for the iPhone app* or download the lite version for free. (But you’ll want the paid one, trust me.)