Microsoft’s new Surface tablet – is it a game changer for iPad? 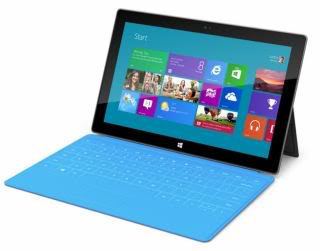 Last week’s big  Apple WWDC announcement about major updates to iOS and MacBooks, along with yesterday’s Microsoft tablet announcement…well, you can imagine I’m pretty much in tech heaven right now. Even though I’m a loyal iPad user, I have always paid attention to other tablet launches. And now with yesterday’s launch of the new Microsoft Surface tablet I’m thinking Apple has a real competitor here.

Microsoft is coming to the tablet game quite late, but the Surface is a very sleek device that is going to appeal to a wide audience. Why? First, it’s just a beautiful piece of technology. The design looks like a cross between an ultrabook and a tablet. It’s super thin but boasts a huge vibrant 10.6″ screen (nearly an inch bigger than the iPad, but with the same weight) that makes it great for working, entertainment, media consumption and whatever else you’d do on a tablet.

The Surface is going to be available in two models–a version that will run Windows RT (a mobile operating system for tablets) that is meant for the general population and a Windows 8 Pro version for enterprise users who will be using this more as a notebook computer. You’ll probably be more interested in the former, which is thinner and lighter and will be offered in 32GB and 64GB storage options (no 128).

There are a lot of cool features that would make the RT a very fun tablet to play with. Here are the features that impress me off the bat:

Built-In Keyboard!
Holy Toledo, the smart cover-cum-keyboard made me do a double take. Embedded into the cover of the Surface is a fully functioning physical keyboard. You can choose the Touch cover (shown in blue above) which is similar to the iPad keyboard but in pretty bright colors; or there’s a Type keyboard (in black) that offers satisfying clickable keys.

Kick Back with the Kickstand
Having a built-in kickstand without having to rely upon a separate accessory case to prop up the device is smart. If you want to set up your Surface for watching movies or video chatting, there’s no more fidgeting with a persnickety case.

Ports? Yep, It’s Got ‘Em
A big complaint about the iPad is its lack of USB ports. The Surface comes with two. No adapters required for all those external devices and accessories.

Cool Software
Since Windows is the core operating system, the RT version will come with Microsoft Office already installed. Moreover, the “Metro” interface with its “updating tiles” is visually appealing with live updates of things like emails or the local weather, giving it a very futuristic feel.

In addition, Xbox users can download a SmartGlass app to the tablet for instant connectivity to your Xbox account to your device for your gaming/watching/listening pleasure.

Price
Microsoft has remained mum about how much these Surface tablets will cost, but reports claim that pricing will be “competitive,” so industry guesses put it at around $600+ for the RT version and possibly $1,000 or more for the Pro Surface. I’m wondering if it needs to come in a little less than an iPad, which is often one of the biggest reasons people don’t flock to Apple devices.

As for the down sides…
Now, here’s the thing. One huge aspect that makes Apple’s iPad stand out from all other tablets is of course iTunes and the hundreds of thousands of apps available. The Surface does offer apps through the Windows Marketplace, but the breadth and variety doesn’t even come close, and probably won’t for a while. A lot of that will depend on the developers, and look how long it took Android to catch up. Yes, a lack of apps is one detractor. But it’s a big one.

The units are expected to begin shipping in the fall when Windows 8 is officially announced.

Will the Surface be a true competitor to the iPad? It’s hard to say, but from what I’ve seen thus far, it’s definitely worth a second (or third or fourth) look. -Jeana

For more information on the Microsft Surface tablet, visit the Microsoft website.