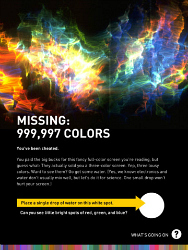 I decided to buy an iPad 2 for my eight-year-old to use in our homeschooling lessons. That’s right — it’s for educational purposes, kid. And no, Angry Birds Space does not count as a physics lesson.
So I’ve spent the past few days scouring the app store for cool kids’ apps that are fun and educational. And I’ve already discovered three fantastic kid-friendly science apps that will actually have your kids asking to study chemistry, physics, and biology.
Did I mention the best part? They’re all free. I love free! Because, I mean, I just dropped $400 on an iPad.
Color Uncovered App: Fun with Physics (and Neurology)
The Exploratorium Color Uncovered app (above) is an interactive ebook on the science of light, color and color perception. Featuring a slick, easy-to-navigate interface, and chock full of cool interactive games and optical illusions, it’s sure to mesmerize even those kids who think they don’t like science.
NOVA Elements App: Making Chemistry Cool
I cannot emphasize enough how awesome this app is, so you will just have to install it immediately and see for yourself. The free NOVA Elements app for the iPad includes full two-hour video of NOVA’s Hunting the Elements special with David Pogue, but that’s just the beginning. Browse an interactive periodic table of the elements to learn fun facts about every element from hydrogen to ununoctium.

And then build the atoms and common chemical compounds, particle by particle, in an interactive game that helps kids (and adults) learn intuitively how chemical bonds are formed. My kid couldn’t put this game down — and for that matter, neither could my husband.
Creatures of Light App: Biology Can’t Be Boring When It Glows In the Dark

If you can’t make it to the American Museum of Natural History to see their fabulous exhibit on bioluminescence, this beautifully executed app is almost as good as being there. Learn how fireflies make their glow, watch a dolphin swim through a twinkling sea of tiny light-up creatures, and read how scientists uncovered the secrets of animals that glow in the dark.

The app has nice tips for creating a welcoming place for luminescent creatures in your own backyard, too. Which is a great way to get your kids off the iPad, and exploring science outside. -Jaelithe