4 great Halloween apps for kids that really are treats 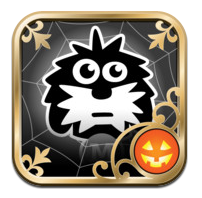 Who picks “trick” instead of “treat?” I’m going to go with no one. Which is why I want to share with you four of my favorite iOS apps for Halloween that will keep the kids busy while I sneak another fun-sized snack from their Halloween stash. –Christina
We love Millie—the sweet city pooch who goes on loads of adventures—and her Halloween-themed app, Millie’s Book of Tricks and Treats, is total canine sweetness. My kids love going from “door to door” to see if Millie will get a trick or treat, most which end up involving bacon. Also on each of the ten screens, there is a scratch-off photo of the easy-going canine in various adorable Halloween costumes, as well as hidden stickers on each page to collect. Unlike her previous two apps, there isn’t a lot of “story” here, but my kids still smile at the antics of Millie. ($.99 for iPhone, iPad)

Similar to Night & Day Studios’ Peekaboo Barn, your little ones will get a kick out of Peekaboo Trick or Treat with Ed Emberley, which reveals all sorts of ghoulish creatures once your child taps the set of doors. Definitely aimed at older toddlers and young preschoolers, this app features a voice narrating the name of each character which helps make them not as scary. In fact, I thought most of them were pretty cute, though the app is quite repetitive. But if you’ve got a super sensitive kiddo, you might want to sit with him when he plays for the first time. ($1.99 for iPhone, iPad)

I find a lot of monster-themed Halloween apps are just too scary or gruesome for kids. But, the creative iPad drawing app, ILuv Drawing Monsters is so clever and fun, it’ll have even the biggest scaredy cat running over to show you their 3 Head Monster picture. And since it isn’t specifically a “Halloween app,” I know my kids will love it as much in February as in October.
Step-by-step instructions help kids work on their fine-motor skills and create something that looks pretty cool. And there are tons of ways they can customize their drawings by adding their own touches, choosing crazy color schemes, and even adding text.($.99 for iPad)

Worried that the kids will turn into couch potatoes (or pumpkins) with all this app playing? Check out MotionMaze Trick or Treat which has your kids leading a little ghost on a motion-activated maze to reach a pumpkin. Works on your iPhone or iPad, though that will be the day I let my kids hold my precious iPad out in front of them and bumble around the house. In other words, put it on a well-protected iPhone instead. The sound effects are a little creepy (cue evil laugh) and the map gets tricky after the first few levels, but older kids will like seeing how fast they can walk—or jog in place—through the maze. (free for iPhone, iPad)
Check out our Halloween apps post from last year for more cool kids’ apps for Halloween.