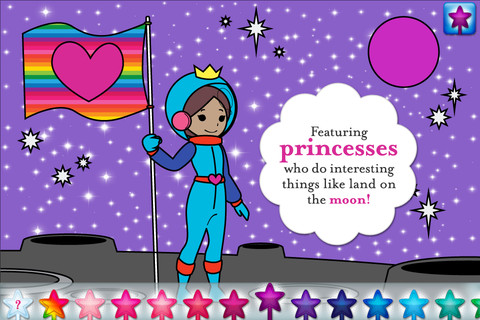 If it has sparkles, hearts, fairies, crowns and cupcakes, my preschool princess is all over it.

Me: not so much. Which is why I was really surprised to fall in love with Princess Fairy Tale Maker app from app developer Duck Duck Moose almost as quickly as she did. Though I’m not anti-princess in the slightest, the level of girly spelled out in the app title had me thinking I’d get a cavity just downloading it. And frankly, I don’t like perpetuating the myth that a girls’ dreams has to be limited to princesses or at best, ballerina princesses.

Then we started playing around in the Princess Fairy Tale Maker app for iOS, and all that steely resolve melted away. The app isn’t quite educational, but it is multi-layered. And, it’s not about princesses as much as I thought it would be. Sure, they’re in there, but the story creation option allows you to do whatever you want with them–fly them to the moon, turn them into swashbuckling superheroes, and more. Albeit with a little crown on their heads each time.

In other words, though the premise is girly, what you do with it can be as frilly or adventuresome as you like.

The main activity is where the app pays for itself in rich content. Kids can create their own fairy tale, choosing from 32 animated background scenes including the usual storybook settings–castles, forests, deep sea, clouds or even a photo from your camera roll–plus 192 animated “stickers” that look like a cross between paper dolls and Shrinky Dinks featuring girly faves like ballerinas, mermaids and smiley-faced cookies.

But the best part comes next: Your child gets to play storyteller with a “record your voice” option. A short count down gives you three beats to get ready and that’s it. Make a mistake? Simply re-record. Don’t want to talk? Use background music or noises instead.

What’s more, if your child moves the stickers around while recording–tapping their mouths makes them open and close!–they’ll move in the final piece like a short movie.

And, when storytelling time is over, the app offers up 32 coloring pages inspired by classic fairy tales, plus a few that celebrate the idea that girls can do whatever they want to do. I suppose if my daughter wants to land on the moon in her tiara, I can live with that for a little while. –Pilar

Download Princess Fairy Tale Maker by Duck Duck Moose for iPhone, iPod Touch and iPad on iTunes for just $1.99. The price is like a happily ever after.

See why we think Duck Duck Moose is one of the leaders in educational apps.