How do I get my kids started on Minecraft? A parents’ primer. 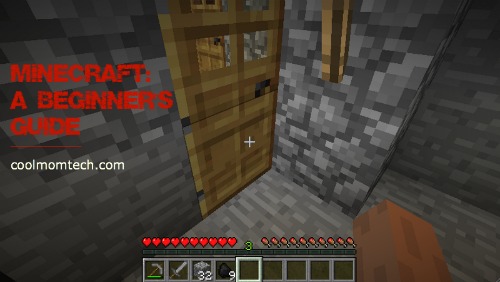 Over the weekend, my two older kids plunged head first into the world of Minecraft, and save the couple of desperate tweets and Facebook posts asking for help, I was pretty much on my own getting them started.

If you’ve got a kid who wants to play Minecraft, here’s a complete introductory guide for parents to help kids get started.

Minecraft is a creative building game that allows players to build a virtual 3-D world using square blocks. There are two modes of play: Creative and Survival. The creative mode gives players an unlimited supply of resources, including health, and the ability to fly. In survival mode, players must find resources to maintain their hunger and health, which includes making tools and building a shelter before night falls and the zombies, creepers and other hostile mobs come out.

There are essentially three different gaming platforms where you kids can play Minecraft: on a mobile gadget (iOS/Android), XBOX, and on a PC/Mac. All of them allow your kids to play the game a bit differently, so take a peek at these tips before you decide which one you want to commit to. Mobile:The Minecraft Pocket Edition (above) for iOS and Android is called “Minecraft Lite” by all the kids. Basically, it allows your kids to play the game in both survival and creative mode, and they can play with other kids if they’re on the same WIFI, however, the game itself is extremely limited: no modifications, no super cool features.

Who should use this: Kids who already love Minecraft and want to be able to play on the go.

XBOX:Even though the Minecraft XBOX downloadable game is a little outdated, I’ve heard that it’s great for beginners who might not be too handy with keyboard shortcuts and a mouse (which is what you’ll need for the PC/MAC version). Plus, up to four kids can play at the same time (though be aware online play can occur too). There are some modifications for this game, however, a serious Minecrafter will grow out of this play method very quickly.

Keep your eye out for the XBOX 360 Minecraft version which should be hitting shelves at the end of April.

Who should use this: Kids just getting started on Minecraft who might not yet be ready for the seriousness of the PC/MAC version.

PC/MAC:So the Minecraft PC/MAC game is actual computer software that you need to purchase ($26.95) and download to your computer for each player, unless you have two kids that don’t mind sharing (though then they can’t play with each other in the same world). It requires keyboard and a physical mouse (for right click purposes). However, it is the way serious gamers play the game, because there are modifications and all sorts of cool add-ons that happen on a pretty much daily basis. Plus, if kids want to play Minecraft with their friends, this is really the only way they can do that.

Who should use this:A child who wants the full Minecraft experience and is pretty handy with keyboard and mouse.

Once you decide which method you’re going to use, your kids will need to name their world and then choose a mode. Most avid players use survival mode, which presents more of a challenge, though it can be a little difficult at first since you’re basically dropped into a world and left to your own devices to make tools to build your house.

Though people still have fun in creative mode, like this guy who made a Star Wars Imperial Walker. Whoa!

My daughter (8) was a little stressed out at first trying to figure everything out and wanted to read anything she could find to help her, while my son (6) pretty much knew he could delete the world if it didn’t work out and start again so he was happy to just play around and figure it out on his own.

My suggestion: Take a peek at this How to Survive Your First Night YouTube video from Paul Soares Jr., a well-known Minecraft expert who makes family-friendly videos. This will help your kids get started without getting too frustrated.

There are a few things parents should be aware of before kids play Minecraft.

First, there are zombies, creepers, and other hostile mobs that come out at night. If you’ve got a sensitive child, you’ll want to be careful and perhaps use creative mode, or play along with them in survival mode. It can be very disconcerting to be left without shelter in the dark, which is when the scary things come out. But it’s important to know that you can delete the world and start over before that happens.

Also, you can kill animals for food, which might be an issue for some folks. This is not a requirement of the game. In fact, my daughter is now farming chickens and there are fruits and other things you can grow without having to eat meat. And finally, there is the issue of multiplayer game mode, which allows your kids to play with other Minecrafters worldwide. I’d suggest starting first with singleplayer mode, which means it’s only your kid in the game and no one else. Then if they ask about playing competitively, you can set them up with a sibling or friend on the same WIFI in your house (on different computers) or on the same secure LAN (local), which is what a lot of parents use to monitor their kids.

At least then you know they are only playing with, say, school friends or the cousins.

Parents can also set up a server for their kids at a low monthly cost and then give out that protected information only to designated friends, which is a great way for kids to play safely but still interact with others in the game.

Minecraft Bottom Line: This is a really smart, creative game that even I enjoy playing (shhhh). And even better, there’s exceptional educational value, which is an important for me as a parent if my kids are going to play something for an extended period of time.

Just ask my very excited daughter who figured out how to make glass by melting sand in her furnace and has already created a two-story mansion out of the side of a cliff.

[Thanks to fellow Minecraft parents Whitney and Joe-Bob, as well as teen expert Ben for their help!]