Lucky Diaz’s Blue Bear gets his own app 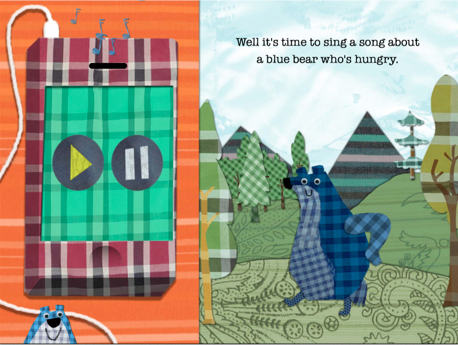 You have heard a lot from us about how much the family music world has grown in recent years. One of my own favorite newcomers to the kindie scene is Lucky Diaz and the Family Jam Band. The group, whose popular Blue Bear song has topped the charts on XM/Sirius’ Kids Place Live, has decided to reward their fans by blessing the perpetually hungry character with his own iPad app.

As with most kids, mine heard the song and thoroughly enjoyed, but it wasn’t until we had the Blue Bear app with its non-stop access to the video and song did everyone fully get its unbelievably catchy nature and full potential for fun.

The app has four main features all using awesome texture-styled art and animation from designer Brian White. The simplest of the offerings is the song itself which is set up on a little kid-friendly music player. Most used in our home is the music video player which is so addictive, my daughter got to the point where she didn’t even let the video finish before hitting the repeat button.

There are also two games designed around the themes of the song. In the first game, you’re the Blue Bear who needs to catch donuts the passing birds drop from the sky in order to earn points. (Can you tell why kids love the song?) This is the more challenging game, though a bit too compex for my 3.5 year old. In the frog game, the goal is to collect as many hotdogs as you can to gain points and avoid getting stung by bees–a great option for younger kids with slower reaction times.

For $.99 which is basically the cost of the song itself, this is a great deal for a simple bit of fun. Parents, if you’re anything like us, you’ll find yourselves jamming along to the beat while the kids get to let their imaginations run a little further with the character. –Stephanie M

Download the Blue Bear app for iPad in the iTunes store for just .99. To hear more from Lucky Diaz and the Family Jam Band visit luckydiazmusic.com.

Stephanie Mayers is entrenched in the kindie rock industry, a former gallery manager, and a self-proclaimed foodie who doesn’t get out to eat much. (Darn you, parenthood.)
Bio
Twitter