Figaro Pho app: Like Cut the Rope if it was created by Tim Burton 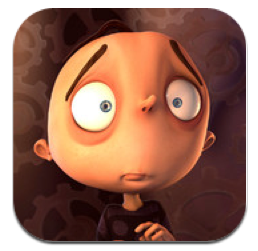 I kind of wish today was Friday the 13 and not Saturday the 13 because that would be even a more apt date to tell you about this awesomely clever, sometimes frustratingly difficult, gorgeously produced, extremely dark, and very addictive game for your tablet or phone. But don’t be afraid…even if Figaro Pho is.

If you haven’t heard of Figaro Pho (I hadn’t either) he’s the title character of an animated Australian series along the lines of a Coraline or a Paranorman. It’s dark, it’s funny, and I now need to watch it. But first, I was introduced to the Figaro Pho: Fear Factory touchscreen game for iOS and Android.

It’s a puzzle game comparable to Cut the Rope, Where’s My Water or the Angry Birds franchise, and in fact some of the nav and gameplay (like a chance to earn up to 3 stars on each level) will look familiar. But that’s about it as far as similiarities. This is not as cutesie as it is Tim Burton-y, and I happen to love that.

In fact, some of the characters in Figaro makes those green pigs look like cuddly widdle pets.

The premise of the show, and thus the game, is that Figaro, a brilliant inventor, is plagued with so many phobias that he’s built a house in which to isolate himself even though it creates more issues for him. He’s even invented a way to stop himself from aging, making him look like a cute if anxious little boy and not an adult.

The game itself is comprised of 40+ levels in which you help Figaro escape from his night shift in a creepy toy factory. To complete a level, you need to grab up to 3 jellybeans (like the candies in Cut the Rope) and snatch a key that unlocks the door out of the room, but with increasingly hard obstacles and fun gadgets to help you get through it like magnetic helmets or jetpacks.

I am stuck on level 15 right now and losing sleep over it. The cymbal-clapping monkeys are my current bugaboo, but you’ll also find angry clowns, bottomless pits, unforgiving spinning gears, and other stuff of cartoonish nightmares.

As for my kids (oh right, the kids!) they are 6 and 8 and are in love with him. Their favorite part: Complete the task under the allotted time and Figaro does a break dance that they now have down by heart. Go too long, and a nice (or not so nice, in his mind) little old lady swoops down on a crane to take Figaro away.

There may be skulls involved.

Very young kids who scare easily could be uncomfortable with the haunted sound effects and pained look on Figaro’s face, though they would find it too hard anyway; you’re going to need some problem-solving skills to get through the levels. But once you do, it’s super rewarding. And did I mention addictive?

I’d write more but gah, I have to figure out that stupid level 15. –Liz

Also check out the first app, Figaro Pho: Creatures and Critters for Android or iOS.