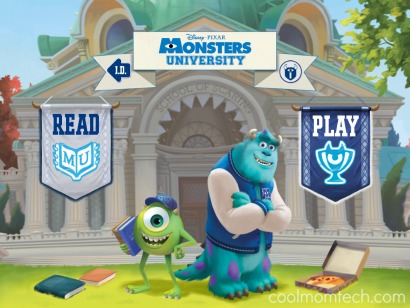 If you’re a Pixar fan, a Monsters Inc. fan, or one of the millions of new Monsters University fans, have we got the app for you.

The Monsters U Storybook Deluxe app for iOS and a more limited version, the Monsters U app for Android, are the companions to the Monsters University film which we recently reviewed. (Shorthand: Loved.) I tried the full version out on my iPad and can see why it’s getting great ratings on both platforms.

(Though be sure you have enough room. This thing is huge.)

Kids start off by uploading a photo, adding some horns and fangs and creating a college ID card. After that, it’s essentially it’s comprised of some fun games from the movie, plus an interactive storybook that recaps the film including the real voices from cast members, so it can be a cute way to get younger kids feeling less nervous about seeing the film with their big siblings, should that be an issue.

Know that it’s one big spoiler, however.

If your kids have already seen Monsters U, they’ll enjoy reliving the key scenes from the movie with some basic interactivity, nice animation, and even a few movie clips–though they will easily be more interested in the games.

The 5 first-person POV games are quite challenging, even on easy–I failed the Toxicity Challenge in about four seconds. It’s a bit annoying that the instructions repeat at the beginning of each game, but considering it took me 6 tries to complete Don’t Scare the Teen, maybe it’s smarter than I am.

If kids play long enough and well enough, they unlock scare cards and work towards earning a trophy. And you know how kids feel about rewards. Plus there’s a fun surprise at the end of each game which involves actual roaring. They’ll like that.

As for the storybook, it’s fairly extensive, will a full 34 pages, and the production is exceptionally well done, as you’d expect from Disney Interactive. The main issue is that the level of the storybook app is perfect for preschoolers, while the movie itself will probably be over their heads. (“Mommy, what’s Greek Week? What’s a mascot? What’s a major?”) But if you have a kid who’s in Monsters U obsession mode like mine, they’ll probably be all over it anyway.

Now here are the standard parental warnings: Be aware that if you click on the weird little icon on the top right (it looks like a shield with horns), you will end up on a settings page with banner ads at top that poof! take you directly to other Disney app downloads. And no, they are not free.

Make sure, as always, your kids don’t know your app store password and that it’s required each time for purchases.

There’s also a “connect” button in which you can type in a birthdate and email address to get email updates from Disney Books. Really like this app, but could live without all the hard sell, especially when kids are off using it on their own. Stay off the settings page and you’ll be very happy. –Liz