The safer, smarter future of light bulbs is here: The NanoLeaf LED light 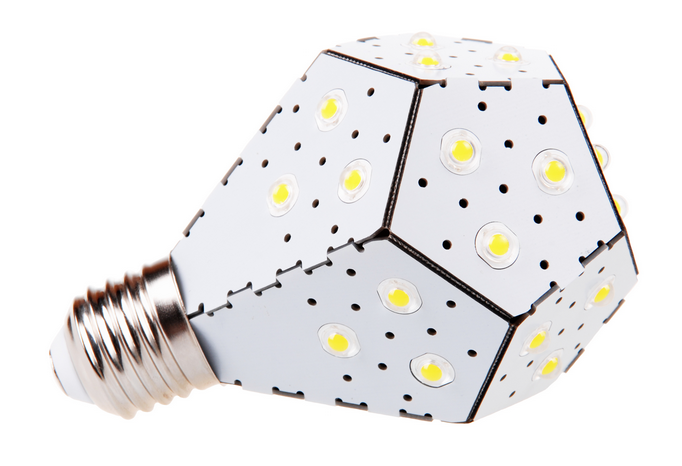 Everyone know knows the benefits of compact fluorescent light bulbs–longer burn time, less energy costs, more effeciency. But now with increasing concern about UV radiation and mercury emissions–especially when they break–and so I’m beyond happy to see a whole new light bulb option hit the market that could absolutely change the world.

The brand new NanoLeaf LED Bulb could indeed be the future of lightbulbs. Yes, they look totally different than any bulb you’ve seen, because that outside is actually a printed circuit board. However they still project light 360-degrees like an old-fashioned incandescent bulb with a nice warm white glow, but wow do they save you energy and money.

The 75 watt bulb equivalent uses only 10 watts of power, meaning 87% less energy than an incandscent bulb, and even 50% less than a compact fluorescent bulb. Plus it can last up to 25 years (based on 3 hour-a-day usage; though I know most of my lights are on longer than that).

That means even though it costs $35, you’re replacing it pretty much once for every 133 incandescent bulbs you burn through. By some estimates, that’s nearly $200 in savings for each bulb.

The thing I particularly like as a parent is that they don’t get hot, which makes them safer when you have curious little kids around with curious little fingers. But beyond that, the components are non-toxic–no mercury!–which gives me a lot more peace of mind. LED bulbs are even endorsed by The Alliance for Health.

I admit I drank the CF Kool-Aid like everyone else because I really want to do better for the environment, but I haven’t been totally sold on the safety of CF. Plus I am replacing my CF bulbs way more than I ever expected. So I’m just thrilled to find that LED technology is here and it could be just the solution we’re all looking for. Edison would be proud.

Preorder the NanoLeaf LED lightbulbs now in white or black from NanoLeaf, in either 75 watt, 100 watt or an 1800+ Lumen equivalent, but note that they don’t work with dimmers. Prices start at $35. Expect a 12/13 delivery.