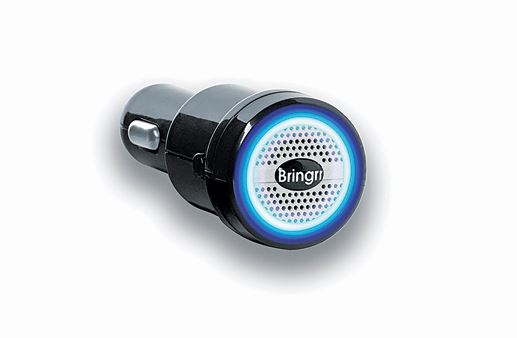 How many times have I gotten into my car and started driving, only to realize that I’ve forgotten my phone? (Answer: Too many.) So I love that a nifty gadget called Bringrr (rhymes with ringer) is upping the ante in the world of tracking devices, acting as a reminder service for you to grab your phone, your keys, your wallet, your kid before heading out.

(No, not really. You should probably  remember your kid on your own.)

Basically you attach a BringTag to whatever it is you need to keep track of, then pair the Bringrr device with your smartphone using Bluetooth so it can track the item via GPS. When you pop Bringrr into your car like a charger and start the car, Bringrr will either shine a nice calming blue to reassure you that you have your phone with you, or display an angry red and emit a warning before you head out of the driveway. You can even keep tabs on up to 10 items at a time.

If you don’t have a car, you can still use the app and BringTags independently as an object tracking system, similar to hipKey. The Bringrr app will also allow you to create a schedule for tagged items, searching for them on days and times you specify; handy for things you don’t use on a daily basis.

Judging by how quickly Bringrr exceeded its Kickstarter goal, seems like there are a lot of forgetful people out there. Or ones who really can’t be without their phones.

The Bringrr app will be available for iOS and Android devices, as well as on Google Glass. A $39 pledge on Kickstarter will get you a Bringrr tracking device and units will start shipping this summer. Check out the Bringrr Kickstarter page for more information.