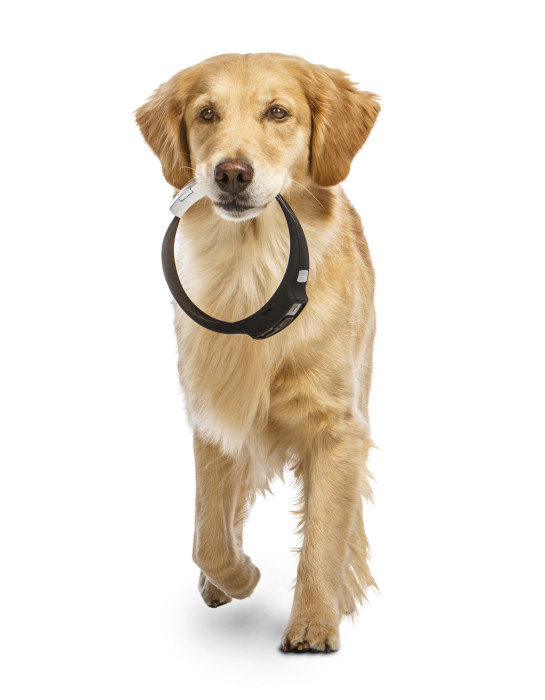 One of the most fascinating things I’ve seen so far at the International CES in Las Vegas is actually a tech invention for dogs. Yes, dogs. It’s a digital collar called Voyce that just launched yesterday, and if you’re a dog owner I think you’ll be blown away by the possibilities. It pretty much does everything for your dog’s health and well-being but keep fleas away.

Think of Voyce a little like a FitBit for dogs, if you could take your FitBit data and share it with your doctor and he would take it seriously. Developed by some awesome guys (and dog lovers) including biomedical engineers, vets, and folks from Cornell University’s veterinary college, this could be the future for all pet-owners.

Wrap it around your pooch’s neck and it measures key vital signs like heartbeat, respiratory rate, resting pattern and calories burnt. And with all that fur to get through to find a heartbeat, it cleverly uses a totally safe radio frequency to track heartbeat.

You’ll see all the data via a companion app (for all devices, yay!) or a web-based app, and in the end, have a really thorough record of what’s going on with Fido. Or in 21st Century terms, Stella. (Is it just Brooklyn, or do you know like six dogs named Stella too?) You just start by entering your breed–every one of the AKC breeds is in their database–so you get some baseline info so that your English Bulldog won’t be judged harshly for not having a Lab’s activity patterns.

And hey, if you have a mutt or don’t really know the breed, that works just fine. Rescue dogs deserve terrific care too.

I asked the developers whether this was just something you’d get for dogs who are old or have health issues, but I liked their point that it’s great to start when your dog is young, because that’s when behavioral problems can begin and you can nip them in the bud using the tracker. For instance, it continually tracks activity so you’ll have a record through the day of when your dog oh, let’s say, is being crazy and knocking stuff over: Is it as soon as you leave the house? Three hours later when he has to pee? Later in the day when he’s bored?

Also, changes in activity level over time could indicate problems like arthritis or hip dysplasia, which you want to keep an eye on for certain breeds in particular.

I like that how much support you get from your subscription; Voyce gets to know your dog more as time passes, so you’ll get customized tips and advice, articles about your breed and more. Kind of like those BabyCenter emails that every pregnant woman in the world signs up for, only for dogs.

As for the collar itself, it’s comfy and lightweight, it charges with a micro USB, and  it’s even water-resistant up to about 3 feet should your dog jump in the lake with you in the summer.  Also, other features will come soon like GPS technology which I think will be huge.

Just know that the collar starts at 12″ around which should be fine for most toy dogs; maybe not so much for baby Chihuahuas. Also, you’re going to pay roughly $200 for the collar then about $15 a month for continual monitoring and access to stats. But considering what I once spent on vet bills and trainers to try to figure out why my dog kept peeing on the floor, this could actually be a huge money-saver in the long run. And a health-saver for your proverbial best friend.

Visit MyDogsVoyce.com to learn more about the Voyce dog collar, and to be notified for pre-ordering in the next few months.