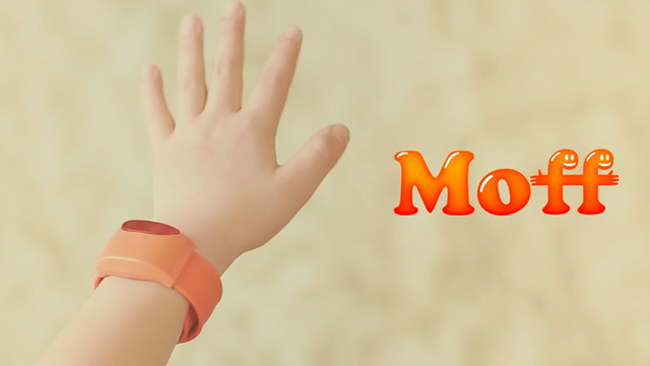 We’re always drawn to interesting tech toys here, and right now we’re a bit fascinated by the new Moff band. Designed by a Japanese firm (thus, the various spellings of guitar), the band promises to turn any object, real or imaginary, into a toy using sound effects. Here’s the way it works: Your kid slaps the bracelet on his wrist–like those slap bands we wore back when we were kids, just without the sharp metal edges–and turns it on. With a wireless connection to your iOS device, it creates sound effects based on your kids’ movement. The idea is that the stick she’s holding can become a sword, or the imaginary wand in his hand can cast a magician’s spell.

What I love about it is that if your kid is the creative type, her imagination can run wild as the story in her head comes to life through sound. Anything in your home can become a toy—the broom is a guitar, the wooden spoon is a stick shift, or that empty cardboard box can fly her into space complete with cool sound effects. I think it would be great for traveling, when I don’t want to lug tons of toys around. And if it means I could clear out some of the junky toys cluttering up my living room because she’s playing more imaginatively, I’m all for that.

Plus, while it is a tech toy, it has nothing to do with staring at a screen and that’s pretty great.

Here’s what I’m not so sure about—kids have always loved making noises themselves, so by integrating tech into their play this way, are we limiting their inherent creativity? I’m not sure. Not to mention, it’s one more reason for them to ask to take over my iPhone.

Even though we have some questions, we’re always glad to see innovative technology built with kids and creative play in mind, and we’re excited about finding out how our own kids will like this when it comes out.

Learn more about the Moff band at their Kickstarter page. The campaign ends April 9, 2014. Currently, the band is just compatible with iOS devices, but they’re working on an Android version.