Rejoice all ye impatient tech users, for the Belkin BOOSTUP is a super fast charger for iPad, iPhone and beyond. 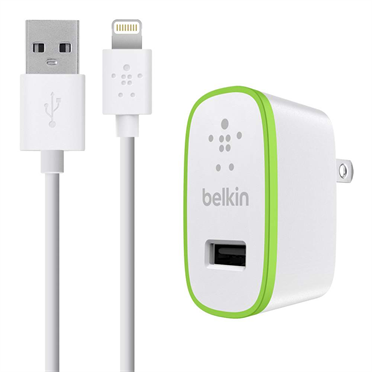 I have become something of an iPhone charging addict. Does that make me a juicer? I can’t travel without my Mophie case, my portable battery pack, and now my Belkin BOOSTUP, a fast charger for iPad, iPhone and other iOS devices. Let’s just say it powers them up faster than anything I’ve experienced and I am their newest fan.

I hate that feeling of plugging in my iPad Air in a meeting, knowing I only have an hour or so to get it charged as much as possible–and then checking at the end to find I barely made a dent in it. But with the BOOSTUP, I just plugged it into the wall (it comes with a detachable 4-foot lightning connector, and I can never get too many of those) then watched as my iPad Air went from 0% (thanks, kids!) to 33% power in an hour, with a completely full charge at three hours. Three! That’s pretty amazing considering the claims on the site are that it will fully charge it in 6.2 hours. And I remember my early generation iPad that used to need a full night to charge.

Now I can’t guarantee if that was an anomaly or if you’ll have the same experience. But even if it’s close, I’d say the BOOSTUP is $39.99 well spent, especially considering a standard 12w charger from the Apple Store is about half that anyway.

By the way, another charging tip I got from poking around the internet: lower your screen’s brightness and turn off WiFi (or go into Airplane Mode) for an even faster charge. That’s my next juice-addict experiment.

Check out the Belkin BOOSTUP fast chargers for iPad, iPhone and other iOS devices on their website.