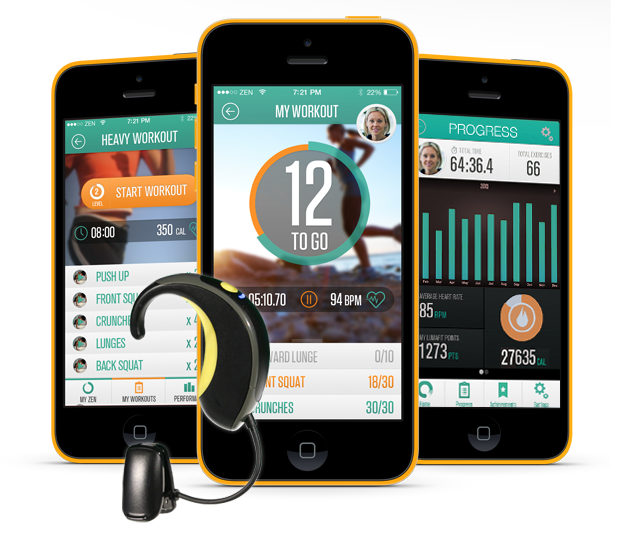 I’m a triathlete and a data geek, so as you might imagine, I keep my eye on cool new innovations in fitness technology. Which is why I was intrigued when I discovered the Lumafit fitness tracker, now on Kickstarter.

The Lumafit uses some of the brand new fitness technology that we saw at the International CES earlier this year, going way beyond what wrist-based fitness trackers can do, like the Jawbone UP or FitBit Flex. It’s worn at head level, attached to your ear, which means it’s intended to track core movements more accurately, from cardio activities like running and biking, to crossfit and bootcamp exercises. Pretty much everything except swimming.

And the Lumafit is made to track your heart rate too — another feature wrist-based trackers don’t have — thanks to optical light sensors attached to your earlobe.

Unlike the popular wrist-based trackers, Lumafit is only worn during exercise or breathing sessions, which I think is a smart idea, and not just because I’m starting to get a tan line from my Jawbone UP24. As a very active person, I don’t necessarily need to track my steps and activity every minute of the day (nor do I want to get obsessed with it).

When it comes to all that data collected, it will all be stored automatically — no need to jot down reps or laps — and can be synced with apps like MapMyFitness and My Fitness Pal. Or just use Lumafit’s own app, available for both iOS and Android.

One more amazing feature I’m excited to try is the way the Lumafit helps you wind down. Whether you call it meditation, mindful breathing, or yoga breathing, the Lumafit measures heart rate variability (not just pulse rate, but how each heartbeat differs from the last), breathing rate, and stress levels as you focus and relax. We athletes tend to think exclusively about our workouts; I love the idea of getting feedback on how well I cool down too.

If you’re not a data hound like me, I could see where the Lumafit might be a little too overwhelming for someone who’s just starting out. But I imagine this will be a really nice fit for moderately serious athletes who would benefit from the heart rate feedback, but who hate those annoying chest straps like I do. It also could be a great option for tracking progress on gym workouts if you do a lot of strength or circuit training.

Right now the Lumafit fitness tracker on Kickstarter is more than halfway to its funding goal, with over a month to go. In fact, I just helped it along myself by pledging at the Early Bird level, which is only $79. That’s how awesome I think the Lumafit is going to be. And how much I want one.

Check out the Lumafit fitness tracker on Kickstarter and make an Early Bird pledge to get your own. Delivery estimated by October 2014.