Is it safe to use a keyboard cover on a computer? 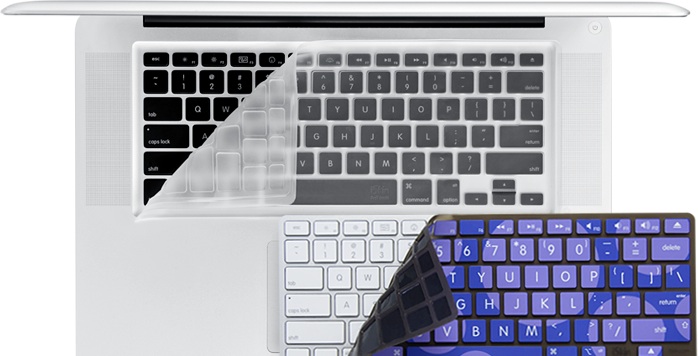 I have used a funky purple keyboard cover (specifically, one of these iSkin covers) for the past few years but was recently told by the technician at the Apple Genius Bar that it’s not always safe to use a keyboard cover on a computer. In fact,  I was going to ruin my laptop if I continued. Apparently, condensation was building up underneath the skin and getting into the inner workings of my computer which were showing early signs of water damage. Uh-oh.

On his advice, I bid adieu to my beloved skin, but did I need to take such a drastic move? Maybe not. Here are some tips if you are attached to your keyboard cover for keeping out kid crumbs (and other less savory things), but also would like to keep your computer around for a while.

Remove the keyboard cover when not in use

One of the easiest ways to prevent moisture from getting trapped under a keyboard skin is simply to remove it when you aren’t typing. Plus it’s a pretty simple step to take, even if it always took me a minute of typing to get the silicone to settle over the keys like a second skin. If you’re using it on your laptop, just keep it in the laptop case next to it, then pull it on when you open it up.

Replace the cover when it’s damaged

As I mentioned, I’d used a keyboard cover for a few years. The same keyboard cover which was so well loved (I really loved it!) that it had holes in the silicone where some of the most-used keys were. I’m fairly sure that some of the moisture found underneath the cover came from my own fingers when they hit those open spots on the cover. In other words, the cover wasn’t entirely covering anything. Replacing your cover when holes or tears appear on the surface is a smart idea.

As the technician pointed out, a keyboard cover can give people false assurance that their keyboard is safe from major spills when in reality, it is only covering a single part of the laptop. Remember that the protection is limited, especially if you knock over a big glass of lemonade while typing. In fact, keep all beverages far away from your workspace. Tough advice to take, I know, says this coffee drinker.

Also check out our post on how to keep your gadgets clean.