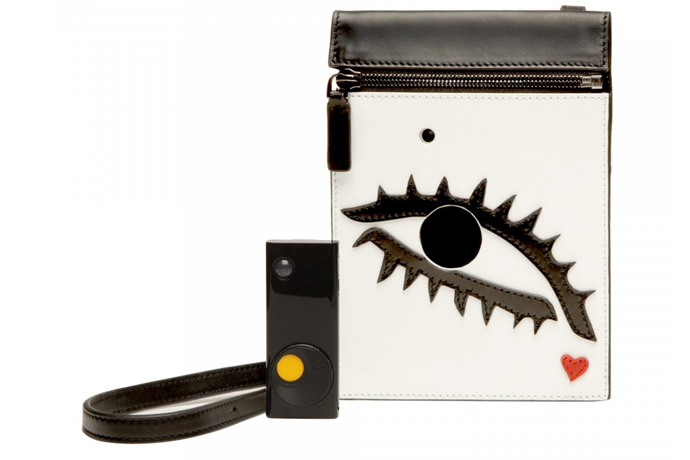 Just as more of the masses eschew their traditional dSLRs for the convenience of smartphone photography and the quick rush of a cheap fling with an Instagram filter, there is much coolness developing in the digital camera world. Which means trendsetting designers are jumping in on the everything-old-is-new-again bandwagon, with partnerships with impressive new tech companies. Case in point: I have been completely fascinated by this summer’s tech fashion sensation, the Lulu Guinness Autographer camera bag. And I apologize, I have been remiss in telling you about it.

(Just too busy photographing my own kids this summer, I guess.)

With a crossbody style and convenient lens hole, it’s made specifically to accommodate an Autographer, the super fun hands-free automatic camera. The Autographer is similar to a GoPro with a wide-angle lens that you wear around your neck or clipped to your clothes, however it takes pictures whenever it feels like it.

It actually snaps when its five sensors are triggered by criteria like speed, light, and color. So can you end up with a whole day of photo journaling without the rudeness of ignoring your companions or fussing with a camera. You might even get some shots you wouldn’t have ordinarily, which is particularly cool for parents. I haven’t tried it yet but based on everything I’ve seen, I’m dying to.

To use it, you simply strap the Autographer to a lanyard — sorry, luxury lanyard — and wear it around your neck, then live your life and see it all in vivid color on the companion Autographer app later. Whether you pout like the model in the photo afterwards is your call, but I would not be so pouty if someone gave me one of these $399 cameras to play with.

I have a cool camera and I am MAD!

And hey, should you be lucky enough to scout down one of the sold out, limited edition Lulu Guinness Autographer camera bags,  well then you’re polite, tech-savvy, and chicly attired too. Three things that it is very nice to be.

Of course in my mind, I’m looking at the bag and thinking designer spy cam! Which could easily be the next tech trend. Legal and ethical implications aside.

Visit Autographer to learn more about their hands-free, wide-angle lens camera which starts at $399 plus extra for mounts and accessories. The app is free for iOS and Android.