Guardian Angel Safety Outlet: the must-have outlet for parents. (Yes, there is such a thing). 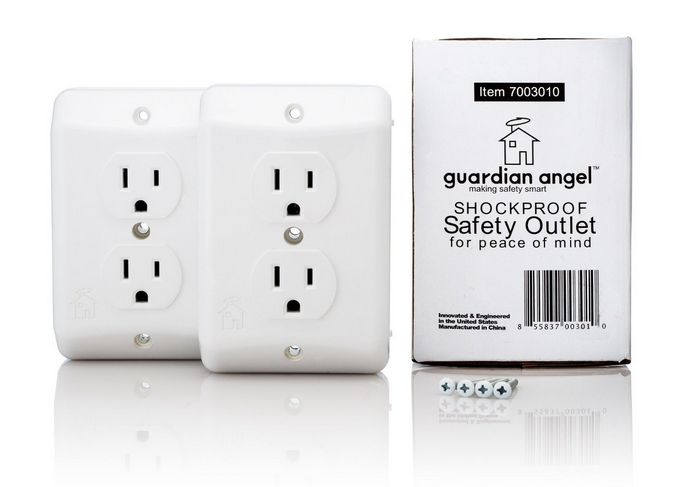 With my third baby who has been on the move for a few months, I re-realized how vigilant we have to be when it comes to babyproofing. She is into everything, including electrical outlets (ack!), which is why I’m so glad I discovered the Guardian Angel Safety Outlet. It might just be the smartest and safest outlet I have ever seen.

After finding that our clever little one was removing all the plastic plugs we dutifully inserted, we realized we needed a better solution. And while products like LivingPlug Inlets and this super cool Node Power Outlet are awesome, they really only take care of the cosmetic factor. Guardian Angel, on the other hand, is a true smart outlet that actually shuts its own power off when it senses something electrically conductive like a child’s hand carrying a metal object is nearby. So smart, right?

Here’s the geeky explanation for how it works: With a special very high-tech sensor inside using something called “capacitive sensing,” it detects the difference between foreign objects and traditional electrical plugs. It’s similar to the technology used on our smartphones that responds to human touch, but it’s even more sensitive to know when a finger or things that conduct electricity are near. When it senses something that shouldn’t be around it, like a key, wire or fork, it shuts off so that even if something is inserted, there is no risk of electrical shock. Pretty amazing.

I installed the Guardian Angel in just a couple of minutes by removing the face plate of my outlet, then plugging the Guardian Angel back in and re-screwing it to the wall. Easy! And while I can’t say with 100% confidence that it fully shuts off (sorry, I was not brave enough to stick a bobby pin into a socket!), I did notice that when I approached the outlet with a traditional plug and inserted it, a green light came on indicating that it was accepted. Whew.

It’s certainly pricier than a pack of those plastic plugs, but the security it provides you is priceless. And until our baby fully understands that outlets are a no-no, it’s definitely nice to have a little peace of mind, especially since there are so many other things to worry about with babies.

Purchase a 2-pack of the Guardian Angel Safety Outlet on their website for $39.99.