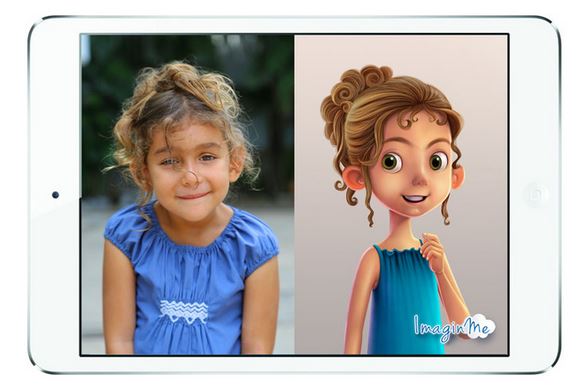 One of my kids’ favorite activities is to grab my phone and watch videos of themselves over and over again. And yep, I know tons of you can relate.  So I can only imagine how excited they’d be to see animated version of themselves as the heros or heroines of their own interactive storybooks. A brand new Kickstarter campaign called ImaginMe does just that and it looks phenomenal.

ImaginMe aims to be the first interactive storytelling platform that lets kids be the main character of their own stories. We’ve seen personalized books similar to this, but never an app with a more realistic likeness than JibJab.

To start, kids create their own likeness using a really advanced 3D model library. You can adjust physical characteristics down to hair style, eye shape and clothing, and even the ability to alter height as they hit a growth spurt. Cool right? The graphics look incredible — almost Pixar-like — bringing them to life in a way I’ve never seen before.

There’s no doubt that kids will be vested in their own characters, whether they’re blasting into space or playing with a dragon. I’d even be tempted to create a character for myself.

The creator of the app, dad Richard Turcious, seems to think the way a lot of us do, challenging the gender roles you might expect in a storybook app like this. So instead of a princess story (hooray!), ImaginMe will launch with HE-RO! HER-O! about a boy and a girl who debate about whether hero refers to a he or a she. Richard was inspired by his own daughter, and his desire to teach her that her world of potential is limitless.

If ImaginMe is funded, the plan is to release a new story every 2-3 months that focuses on different themes, but all convey similar messages of empowerment, creativity, confidence and fun. There’s even mention of a potty-training story, which would be hugely positive for younger kids (and exasperated parents) who are going through that process. So let’s get this funded!

For more information about this neat campaign, check out the ImaginMe Kickstarter page and make a pledge starting at $25 to get the launch app and first story. If they reach their goal, it launches May, 2015.