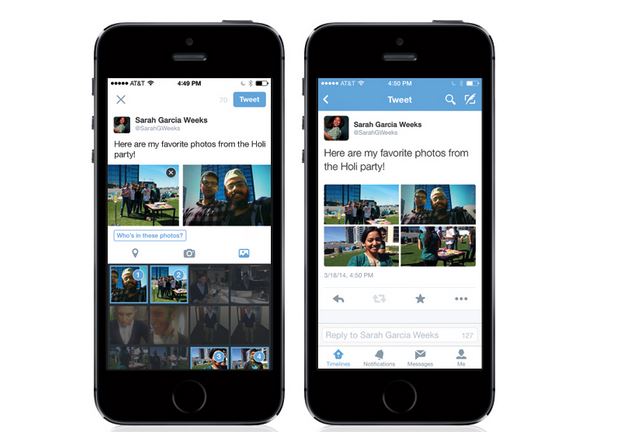 With Instagram having officially passed Twitter in mobile users this past spring, it’s not surprising that the other social networks are trying to take a page from what’s successful about Instagram. I’ve always loved all the great apps for creating Instagram collages to help you tell a visual story. And now Twitter has rolled out the Twitter collage feature, for you dedicated users to show off more than one of those awesome pictures at a time. If you’re wondering how to make a Twitter photo collage, it’s super easy via the Twitter app for iPhone or Android, or through your desktop–for those of you who still use those these days. (Ha.)

If you haven’t yet tried it, here are the three easy steps for making a Twitter photo collage:

When you create a tweet, simply click on the “Add Photo” icon to pull up the photos from your camera roll. Be sure the app has access to your photos in the first place. If it doesn’t, you can change the setting under Settings -> Privacy -> Photos -> Twitter.

2. Add Up to Three More Photos

After the first photo has been selected, click on the “Add Photo” icon again, and select up to three more to complete your collage. Collages can be created with up to four photos–although you don’t get a say in how they’re laid out.

The photos are automatically set into a template, and when you send the tweet, it shows up as an instant collage. Voila!

As you can see, food pics are a personal favorite of mine, but I can see this being great for any kind of party or event, for adorable shots of your kids, a new puppy, or even to show off a new pair of shoes you finally broke down and bought. It’s also fun for a #throwbackthursday post, should you want to post multiple shots of yourself back in the day with embarrassing hair. Or add type to send out a cool message, as AMC did with the Walking Dead.

While our Twitter feeds aren’t yet inundated with photo collages, here are a few examples I like for showing off artwork, photography and even great website content from the likes of Etsy and the New York Times.

Another benefit: You can tag up to 10 people with a tweet without impacting the 140-character count, to give shout-outs to people who are relevant to your pictures. (But hint: Don’t tag people who are not relevant, like celebrities or major publishers, just to get their attention. That is completely annoying.)

Even though Twitter hasn’t worked so well as a visual medium, I’m wondering if  this feature will give it a bump. Especially since you don’t have to go into a whole new app to make the collage before sharing. I’m hoping it becomes more widely adopted once people realize how easy the collages are to create. Hey, I like looking at pictures.

The Twitter app is available for free on iTunes and Google Play.