Anorak: The happy magazine for kids goes digital with a fun app. 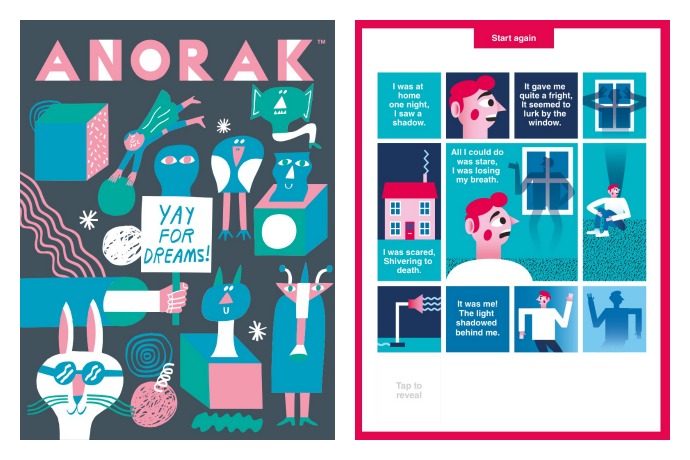 Not all kids’ magazines are created equal, and one that’s risen to the top of our reading list lately is Anorak. The art is modern and cool, the stories interesting, and the jokes witty. And now this British mag. known as “The Happy Magazine,” is available in the most appropriate format for the digital native generation: in a new Anorak magazine iPad app.

Just like the print magazine, the app has stories, silly comics for pre-readers, games, coloring pages, word finds, toy and clothing recommendations, book recommendations, and interesting articles for mid-grade readers, mostly focused on that months’ topic. The app’s first issue is all about dreaming, but other popular magazine issues have focused on sports, candy, inventions, holidays, and more. Basically, all the things kids like.

Now because the magazine is published in England, you’ll notice a European perspective in both the illustrations and also the topics they discuss. For example, the history issue featured Henry VII on the cover and included a story called Diary of a Tudor Kid.  But my stateside kids think it’s fun to read about things they don’t typically learn in early elementary school, and even I get absorbed in the magazine each month myself.

Of course that also means that you may curse the fact we don’t use the metric system, when trying to convert grams to cups in the recipes.

Both the Anorak app and the print version publish quarterly, although bear in mind that there is some duplication of content. In fact the first issue of the app is a repeat of the first issue of the 2014 edition of the print magazine. But I’m keeping my fingers crossed that more people will subscribe so that they can grow to monthly issues. That would really make Anorak the happy mag for me.  Especially when I hear the narration delivered by kids with adorable British accents. I pretty much can’t resist when it loads and a tiny English voice says, Anorak magazine: How happy we are!

You can find the Anorak magazine app for iPad only (we’re hoping for Android soon) at the iTunes store for $3.99 per issue. And you can subscribe to Anorak magazine print issues on their website for £22 a year.