Hook’d social music app: Try it once and you’ll totally get the reason for its name. 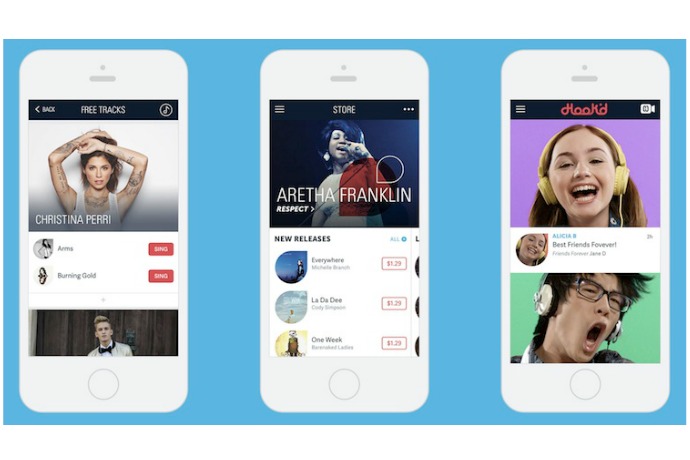 Everyone likes singing karaoke. Well, everyone except maybe my husband, who prefers to do a Leonard Cohen-style speak-singing thing when it’s his turn up at the mic. Still, even he would get a kick out of Hook’d, a fun social music app that blends selfie culture with karaoke and Vine-style video. The result is pretty neat and easy to use.

Here’s how it works: Select “Sing” from the side menu, and scroll through the available tracks. It’s like flipping through album covers on a super fancy jukebox, even though you may not recognize many of them. More on that later.

Once you find the song you want to warble along to, hit the red Sing button beneath the artist photo, and the app opens up your iPhone camera. From there, choose whether you want to sing along with the lead vocals or go it alone. You could also opt to have the camera face away from you, but we don’t want to see your house plant; we want to see you, superstar!

The song clip and recording lasts 30 seconds or so — about enough time to belt out a stunning rendition of the chorus.

Hook’d is free for iOS, but you’ll want to plan on some in-app purchases. In the free section, there’s a small rotating selection of songs available, and most of them are geared toward tweens. I had to scroll a bit, but then I landed on a Backstreet Boys song and a few other familiar pop ditties, and I was chirping along.

To unlock more tracks, you have to pony up $0.99 each. There are also Hook’d Packs for $4 — five songs with a common theme, like Throwbacks or Love Songs. Or you can become a subscriber, and for $4 per month you’ll have access to all the tracks. The Hook’d catalog has a pretty good variety of songs, like “I Wanna Be Sedated” by The Ramones, “Love Shack” by the B-52’s, and “U Can’t Touch This” by MC Hammer, in addition to a bunch of recent hits.

In other words, we parents might have a pretty good time with Hook’d ourselves.

Hook’d has a strong social component — you can quickly and easily share your singing vids (or “Hooks” as they’re called here) on social media. You can also check out other people’s Hooks that they’ve uploaded to YouTube. Unlike practically every other app out there, Hook’d doesn’t offer the option to login via your Facebook account. But it does require you to use your Google account, or to create a Google account if you don’t already have one, so keep that in mind.

I could see this being a big hit at a tween sleepover or birthday party, or even a family karaoke night. Just be sure to have the tech talk with your kids first, so that everyone is clear about what they can share — and what ought to remain on their Camera Roll only.

Hook’d social music app is a free download on iTunes. Look for the one with the apostrophe — the Hookd app without an apostrophe is another version of Tinder.