Ditch all the remote controls in your house thanks to Pronto. Cue angels singing. 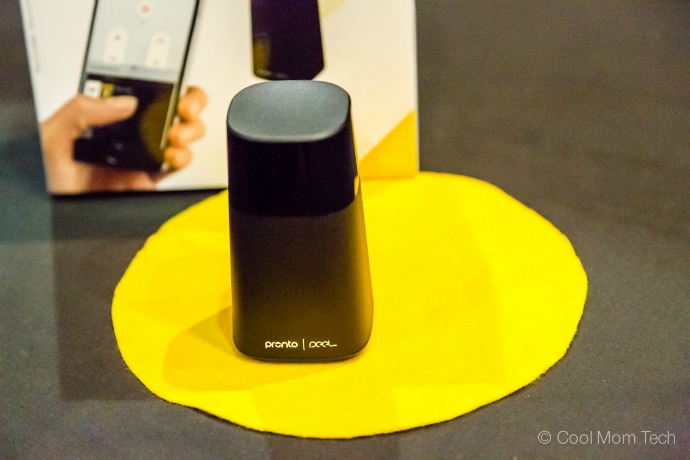 I can barely keep track of the TV remote control, let alone the one for the cable box, the Blu-Ray, the … you get where I’m going, which is why I was pretty enthralled with Pronto at CES 2015, a gadget and app that lets you control all those devices right on your smart phone or tablet.

Once you set up the Pronto device, which can be even placed out of sight thanks to a special extension cable, you’ll download the free Peel app on your smart phone or tablet. And then with the help of Bluetooth technology, your mobile device becomes a universal smart remote, allowing you to control everything — TV, cable box, Blu-Ray player — with just a few clicks, even if you’re not in the room. Kids aren’t coming to the dinner table after you’ve asked them to turn off the TV? You can do it yourself, right from the kitchen. Genius!

And no more trying to explain which remote is for which gadget, because they’re all right there on your own device, all in one place.

I really like that Pronto lets you have more than one user, which means if you can’t seem to find your phone, or it’s dead (story of my life), you can grab the tablet or your spouse or partner’s phone and use that. Though keep in mind, there can only be one active user at a time and if you’ve got a guest in the house, like say a babysitter, you’ll want to be sure that he or she has access to a device that has the app loaded onto it.

Beyond just giving you control to power these devices, you can also set reminders for your favorite shows even select show preferences so you can quickly scan to see what’s on that you might actually want to watch rather than perusing the endless guide. And if you’re looking for new things to watch, the Peel app will give you suggestions based on your existing preferences.

Now since Android phones already have an IR blaster built in (which is what lets you magically control your television), the Pronto is aimed specifically at iOS users who don’t have that capability. The only issue I can see: What do we do with all these darn remote controls now?

You can learn more about Pronto on their website. They’re not available for purchase yet, though we do know pricing will start at $49.99. We’ll keep you posted when they become available to the public.