The Milk Nanny lets you make a baby bottle with your smartphone. 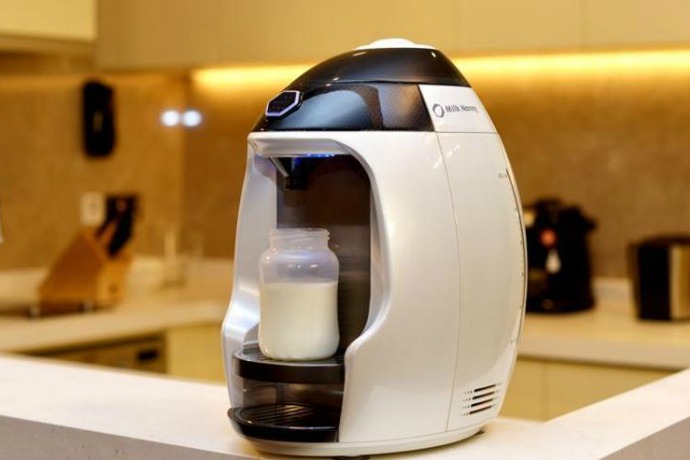 I’m not even kidding when I say that the Beaba Bib’expresso bottle warmer, which totally looks and acts like a coffee maker, saved my butt with my fourth baby back in 2010. I was traveling a lot and doing the breastfeeding, pumping, formula bottle mash-up that so many of us working moms do, and a product I’d have written off as frivolous at one point turned out to be an essential for me.

Then came the Baby Brezza, a device which actually mixes the formula for you. Also genius.

Now lucky new parents are privy to the revolutionary, dad-designed Milk Nanny, which lets you make a baby bottle with just a few clicks on your smartphone. Hooray for 2015!

Similar to the design of a Keurig coffee maker, the Milk Nanny mixes and dispenses formula so all you have to do is pop the top on and feed your baby. Just fill the water tank, pop powdered formula in the ample storage tank (it holds enough water for about twelve 8-oz bottles) and place your bottle on the tray. Press the button, and the water is heated and then cooled to just the right temperature, yielding a perfect bottle, no clumps. You can even pour it right from the self-cleaning spout.

What’s even cooler is that you can control the Milk Nanny with an app on your smartphone (both iOS and Android). It allows you to scan the barcode on your formula packaging, sending all the pertinent information to the machine so it knows the correct formula-to-water ratio. A push of a button on your smartphone and your bottle is made.

Of course the innovation of the Milk Nanny does not come cheap. In fact, it’s a serious splurge for parents who could probably take a few extra steps (and shakes) and make a bottle just the right temperature with the help of a $30 bottle warmer. Not to mention the old fashioned way requiring no technology at all.

However I will say that for some parents, this is going to be a lifesaver. Like if you have twins or multiples. If you’re a working parent who can use that much more sleep and free time. Or if you have a super collicky baby who’s demanding so much of your attention that any little help is meaningful.

You can even ditch some of the pricier items on your registry–oh, say the super expensive baby bedding?– to get your hands on one of these instead. I totally would.

It’s no surprise that the Milk Nanny has exceeded their ambitious Kickstarter goal, but there’s still time to support the product launch and get your own for just $149 instead of the $279 retail price. You have until 2/27/15.