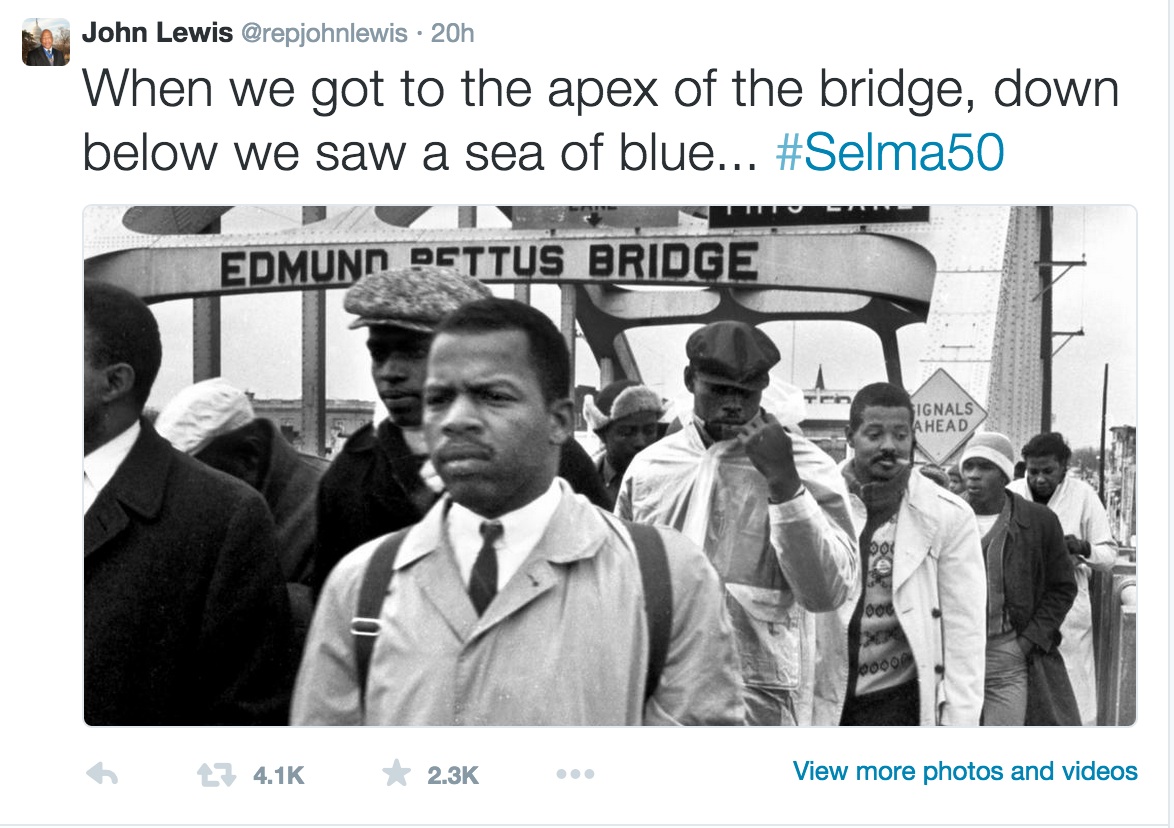 It was really amazing yesterday to see how the 50th anniversary of the 50-mile civil rights march from Selma to Montgomery was honored through social media. What struck me most of all was the Twitter feed of Georgia Congressman John Lewis, who was there that day, as the youngest of the Big Six civil rights leaders marching for the voting rights of People of Color.

Over the course of several hours yesterday, Congressman Lewis described his first-hand account of Bloody Sunday with spare words and powerful pictures, while thousands — millions — of us watched on, rapt.

It’s remarkable when you consider that fifty years ago, the only way the story of the march managed reached the hearts and minds of the American public was through the eventual attention of a few dedicated TV and newspaper reporters. Today, however, the media is also in the hands of the people. We each have the ability to tell our own story, unfiltered, as Congressman Lewis did so eloquently yesterday.

Right away I thought, I need to share this with my children. What a perfect opportunity to further bring the story to life (or perhaps introduce it) in a succinct, manageable, yet entirely vivid way.

50 yrs ago today, we set out to march from Selma to Montgomery to dramatize to the nation that people of color were denied the right to vote

Before we left a little church called Brown Chapel AME, we knelt and joined together in prayer. #Selma50 pic.twitter.com/lNuu8VU6bg — John Lewis (@repjohnlewis) March 7, 2015

About 600 of us left Brown Chapel AME to walk in an orderly, peaceful, nonviolent fashion. #Selma50

When we came within hearing distance, a trooper identified himself and said, “I’m Major John Cloud of the Alabama State Troopers” #Selma50 — John Lewis (@repjohnlewis) March 7, 2015

He said, “This is an unlawful march. It will not be allowed to continue.” #Selma50 pic.twitter.com/pW46cdL5zn

“I’ll give you three minutes to disperse and return to your homes or to your church.” #Selma50 pic.twitter.com/83ccHA99ef — John Lewis (@repjohnlewis) March 7, 2015

The man walking beside me – co-leader of the march Hosea Williams – said “Major, give us a moment to kneel and pray.” pic.twitter.com/3fvecGNnq3

The Major paused for a minute and then he said, “Troopers advance!” And you saw these men putting on their gas masks. pic.twitter.com/NDAkngX9kE — John Lewis (@repjohnlewis) March 7, 2015

They came toward us beating us with nightsticks, bullwhips, trampling us with horses, releasing the teargas. #Selma50 pic.twitter.com/s9Ey2ZavZA

I was hit in the head by a state trooper with a nightstick. My legs went out from under me. #Selma50 pic.twitter.com/AOhJkaUvjz — John Lewis (@repjohnlewis) March 7, 2015

I thought I saw death. I thought I was going to die. #Selma50 pic.twitter.com/AhM8ujpsYi

I had a concussion there at the bridge, and I’ve never been able to recall how we made it back. #Selma50 pic.twitter.com/AsB909DlgX — John Lewis (@repjohnlewis) March 7, 2015

When people tell me nothing has changed, I say come walk in my shoes and I will show you change. #Selma50 pic.twitter.com/9NvfJdSo8r

To further bring his message to life, Representative Lewis also posted this short YouTube video “for teachers and students” that’s worth a watch, whether or not you’re a teacher or student.

He ends with the thought, We have a moral obligation to stand up, speak up, speak out, and make our country, our world a better place. For me, that means talking frankly with my children. And I’m so grateful for social channels like these, and the use of them by the important political figures in our nation’s history who are helping to make hard discussions a little easier and a lot more engaging.

For more on John Lewis, follow  his Twitter feed and visit his Wikipedia page which is nothing short of riveting.