Apps parents should know: Meerkat and Periscope now let your teens live stream. Just let that sink in for a second. 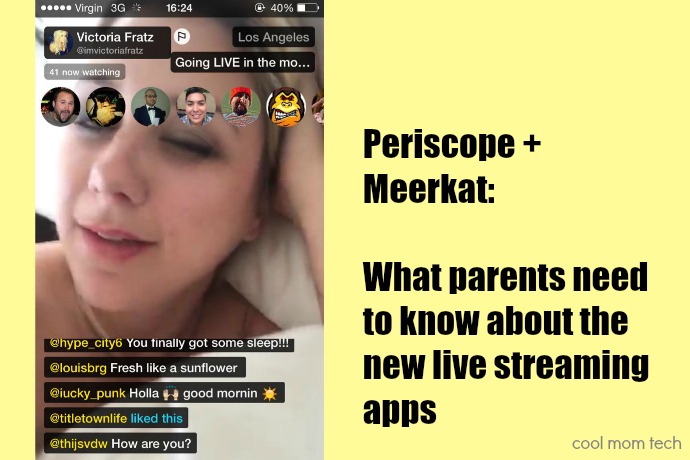 I’m not even kidding that when I heard the the word Meerkat being tossed around for the past couple of weeks, I thought to myself, Is that Meerkat Manor show back on TV again? But then, when the Periscope live streaming app for Twitter launched this past week, I figured out what the heck was going on.

And then I got a little scared.

If you’re not familiar with Meerkat and Periscope, they’re live streaming apps, which allow users to share real time video, broadcasting directly to viewers on the app and Twitter — whether it’s a breaking news event, a first date (ha), a gorgeous sunset, or if you’re a teenager…well, that’s where it starts to get sketchy.

If you’re a parent, here’s why you definitely want to have these apps and others like them on your radar.

Here’s what you see when you open your Periscope (left) and Meerkat (right) feed. Exciting stuff! (Not.)

I’ve been playing around with both of these apps for a few days now, and the are incredibly similar, though Periscope is much easier to use and much easier on the eyes. Plus, it allows you to save your broadcasts to your camera roll and replay them, which Meerkat does not at this point.

Trust me, people totally do just that.

But are we really surprised?

At any given time, I can watch stuff through the app like a backstage video at a News Station in Cincinnati, a Wednesday Night Disco in Amsterdam, even a live Women’s Soccer League Game. Then there’s the one that freaked me out, titled, “She doesn’t know that I’m filming her!”

It turned out to be a girl at a table on her phone, but…eep. I don’t think this is going to be the last livestream with a title like that.

Viewers can interact by commenting and chatting while the live stream is happening, and on Periscope, you can also tap and double tap to send hearts, which “likes” the video in real time without the need to comment. Clearly the developers are trying to make live streaming appealing to a younger audience.

Our concerns about livestreaming apps + kids

So, at this point, you can probably figure out the reasons these apps are so concerning to me as a parent, and it’s not just that they are going to eat up batteries and your entire monthly data.

Of course I get how useful this technology can potentially be, for, say, newscasters who are on location and want to share real time video to their Twitter followers, for brands promoting special events and exclusive content, or for conference attendees who can broadcast content to colleagues who aren’t there. There are actually some really amazing things that responsible people are doing with Periscope, from Jimmy Fallon to the Ballet Director of the Paris National Opera to regular folks innocently sharing sunsets. 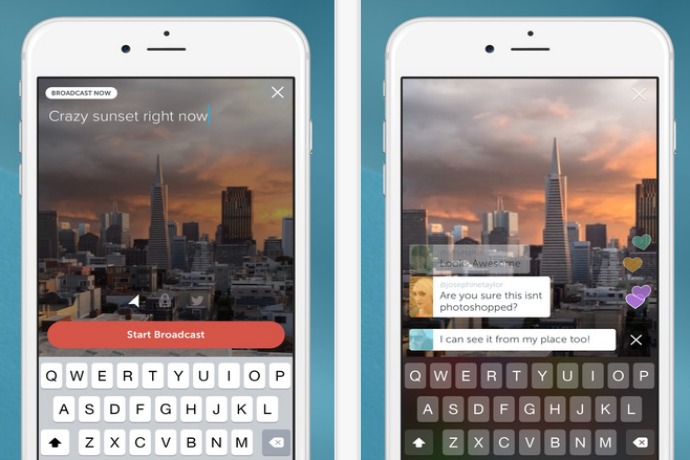 But as a parent, Periscope and Meerkat really, really trouble because, why do kids really need to be broadcasting their business and sharing their locations? Live, as it happens?

I’m already thinking about all the stuff tweens and teens might decide to broadcast, or be the subject of in a broadcast, especially without their consent. From sexual and illegal activity (I didn’t inhale) to just the kind of everyday mishaps and mistakes that create cyberbullying targets and pariahs when they go viral. Don’t even get me started on fraternity parties or Spring Break.

And then there are the kinds of things that the a-holes of the internet might be saying to your kids.

You think YouTube commenters are bad? This screenshot of Periscope freaked us the hell out. And that’s putting it mildly, because this wasn’t the worst of the comments this girl received on her broadcast.

And our concern extends to parents too; who’s to say your kid isn’t going to secretly livestream you in your kitchen dancing? Or, other not-so-innocent things.

Considering that a teen is still developing his sense of judgment, live streaming eliminates that time he might otherwise have to step away from the video and realize that nah, he doesn’t need to share this content, because it might hurt someone else or have negative consequences for him.

If you are thinking hey Kristen, calm down! as any teen reading this right now surely is, just know that while it seems that  broadcasts only go out to people the user chooses to follow, that’s not the case at all.

Who are all these people? And why do I want to watch their broadcasts?

Even though I followed specific people, as you can see from my screenshot above, I was still stuck with a community stream– also how apps like Vine function. In other words, the people you follow are mixed in with random people from the user base.

I not only find that really annoying as a user, but also a little scary, because who’s vetting this stuff? Like the broadcast of the girl who didn’t know she was being filmed — what if that wasn’t just a girl talking innocently on her phone?

Thankfully, Periscope does have a private feature, allowing you to lock your broadcast so only specific followers can view it, as with a private Instagram or Twitter account. But then are all your approved “followers” really IRL friends? While plenty of teens are responsible in this sense, there are plenty of social media users, of any age, who are pretty arbitrary as to how they limit access to private accounts.

Of lesser concern, I should also point out the utter and complete time suck aspect of these apps, which give kids instantaneous access to complete minutia. Really, do teens need more digital rabbit holes as distractions? Especially when it’s stuff like “Here’s me eating a waffle!” complete with the girl’s location for all her followers to see.

Sorry I didn’t get my bio homework in on time; I was watching a girl eat a waffle in Jacksonville.

I strongly suggest talking to your kids about these kinds of apps, and help them decide whether they are something they really need. Maybe you’ve got a budding journalist or talk show host, and the idea of live streaming is intriguing to them. It can potentially be a fantastic tool for teens if used in a safe, smart way.

However it’s super important for parents to talk to their kids about the consequences of live streaming apps as well; not just as the shooter behind the camera, but also as someone who could be an unknowing star of a live broadcast for which they did not give permission.

Let’s be honest, these are apps putting surveillance technology in the hands of kids. And as we know, kids don’t always make the best decisions about what to share on social media.

It’s one thing to share photos, even video, instantly to social media followers. But the prospect of real time broadcasting makes it so easy to absolutely for anyone, that this is a whole new ballgame that parents really need to take seriously. And we’re only in week one.

Meerkat is available on iOS via iTunes, with an unofficial version on Android on Google Play. Periscope is currently only for iPhone users.