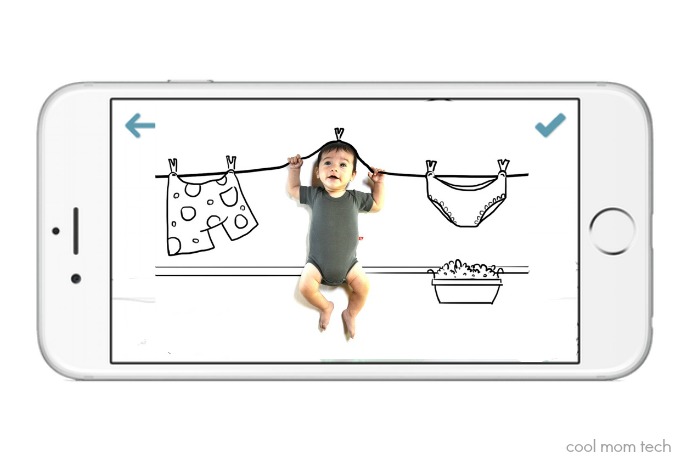 Over the years, we’ve found great illustrators who have taken their own baby photos and turned them into fantastic collage drawings. But now we found a sister team out of Barcelona who’s attempting to do one better with their new Kickstarter: The MyBabyD app will let you upload your own photo and send it to them, resulting in amazing illustrations which are better than you could do yourself. Or at least better than I could do, that’s for sure.

So far, Carlotta and Camilla Daldoss’s app is in its early stages, but I like where it’s going. The nav looks simple and well-designed, and the end result will be great, if it’s anything like their samples on the Kickstarter page.  But there’s more to it than just messing around with photos.

What what really makes this special is that you will be able to turn the final result into a calendar, puzzle, coloring page, iPhone or Galaxy case, onesie, and other keepsakes. So it’s not just about sharing on social media — though of course you can do that too. This being 2015 and all. But hey, if you end up with something as cool as some of these images, I’d love to turn them into photo gifts for family.

Now some of the details are not entirely clear, but I do get the sense that there are two options: Sending them your photo for personalized embellishment for some kind of yet to be determined fee, or playing with your own photos on the app using “stickers” as shown above.

It’s such a clever idea, isn’t it? Of course we do have a few questions, like is it just for iOS? It seems that way, though considering there are Galaxy cases as rewards, maybe there will be an Android app too? Either way,I’m rooting for the sisters behind the MyBabyD photo app. Besides,  I’d love to see my own girls doing the laundry. Even if it’s just in 2-D on a photo mug.

Check out the MyBabyD app on Kickstarter which is expected to launch around September, 2015. There are some really fun rewards for parents, like photo collages featuring personalized, hand-signed drawings from Camilla, or that collage printed on jigsaw puzzles or gadget cases. Hurry, the Kickstarter ends 7/2/15