The ABCiné app develops literacy of the pop culture variety. 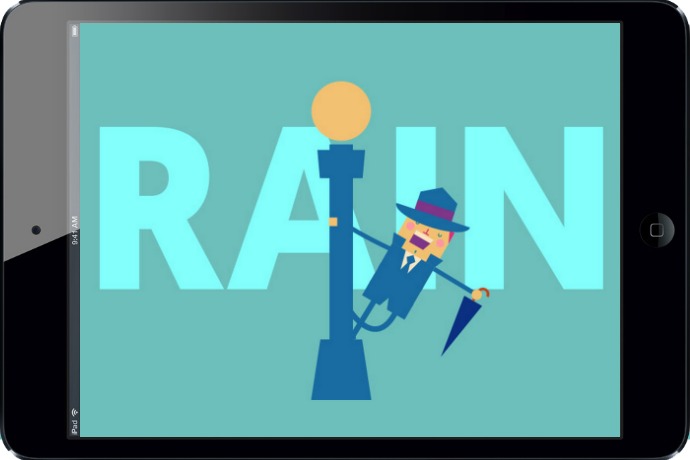 Yes, it’s an ABC app. But unlike other ABC apps we’ve covered here, I don’t know that the new ABCiné app (as in cinéma) from Spanish design studio Atipo for Meikme is going to help kids with the alphabet as much as it will help adults — and a few precious kids — test their classic movie trivia.

Still, I believe that pop culture literacy is an important skill in itself as SPAWNED podcast listeners might know. Maybe even as important as the ABC’s. Eventually.

I’d say mostly the ABCiné app is about feeling cool that you recognize B as the Bomb that Slim Pickens rides in Dr Strangelove, M as Peter Fonda’s Motorcycle in Easy Rider and N’s Nighttime tableau from the more recent Moonrise Kingdom.

(I certainly feel cool knowing them. I also feel like now I have more movies to share with Kristen.)

Also, it’s about the absolutely wonderful animations and charming illustration style. I would even love to order a series of them as prints, or get the entire series printed on a single poster. (Hint hint, Atipo.)

Tell me movie junkie parents wouldn’t be clamoring for one too.

As an educational app — educational beyond film studies, I mean — it’s not actually the best app ever made. While kids do get to trace each letter with their fingers to bring up the imagery, then tap again to watch it animate, that’s really all the app does. Also, as fun as the background music and sound effects are, I was tired of them by about C and my only option for going silent was to manually slide my iPhone volume down to zero.

Also, know that while it’s billed as free, that’s a bit of a red herring; only A through H is free. To unlock the whole alphabet, you’ve got to fork over $.99.  That doesn’t mean I don’t recommend it, though.

In fact, if you’re a film buff, I think you’ll find it a buck well spent, if only to get to watch 26 iconic Hollywood moments come to life so delightfully. And then, screenshot the Pulp Fiction dance scene, so you can turn it into your tablet’s screen saver.

Download a limited version of the ABCiné app free for iOS  and Android or spend $.99 for the full version via in-app purchase. You can also visit Atipo’s Behance page and see all 26 ABC graphics from iconic movie scenes for free. They don’t animate, but they’re still wonderful.