The Sound Cover speaker boosts your iPad volume by 400%. We’ll let you decide if that’s a good thing. 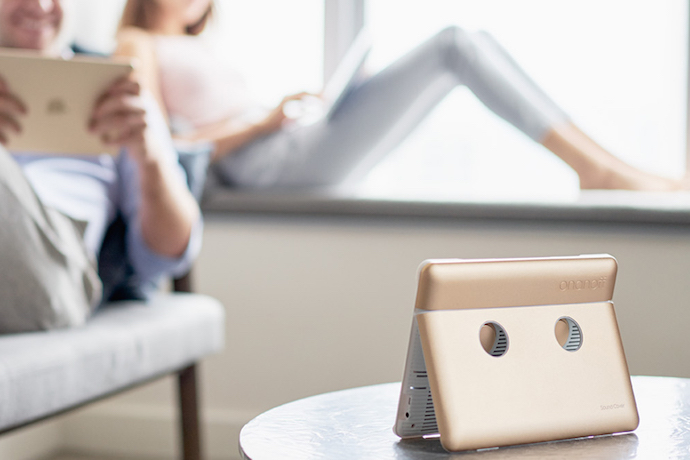 We’ve gotten to the point where my kids watch most of their shows and movies on our iPad. The sound is fine when just one of them is using it at a time, but when they’re trying to share it — which is a feat in and of itself — the sound can be tricky. So I’ve been excited to try out the very cool iPad Sound Cover by Onanoff.

This hard case for your iPad Air claims to boost the sound so loud that you’ll be able to hear it across the house. We’ll let you decide for yourself whether that’s a pro or a con.

Now to be clear, this is not a cover with a speaker built in, like the Belkin Thunderstorm. Instead,  you get a Onanoff Sound Cover that’s a cover when traveling, then comes off your tablet to become a portable Bluetooth speaker that you can prop up nearby. In fact, it connects with any Bluetooth-enabled device — phone, computer, tablet, both iOS and Android — and provides much better sound than the device offers on its own.

You may not need to crank it to the top, but the sound quality and clarity really is improved significantly when you run your devices through the speaker.

When the speaker isn’t in use, that’s when you can clip it to your iPad Air for portability and protection. But a couple of caveats: First, the iPad Air only clips in facing the speaker, so you cannot use your iPad when the cover is on it. Kind of a downside, in my opinion; it’s almost like the fact it’s a cover is besides the point. What it’s best at is functioning as a sleek, portable Bluetooth speaker.

Also, know that while it’s promoted as an iPad case, the iPad Air is the only model I found would clip to it. The website is pretty confusing in that sense, and does not indicate it won’t work with an iPad 2, but hey, we’re here to clear those things up for you.

The net is, I wouldn’t use the Sound Cover as an everyday cover for my iPad Air despite the word cover in the name. The fact that it clips onto your tablet just makes it a more convenient, compact way to transport the Bluetooth speaker with you when you’re traveling, although you’d probably want another case for when you’re not watching media and just want protection. That makes our recommendation a little iffy.

However as for the speaker functionality itself? Well that’s terrific. And pretty gorgeous, too. If you’re in the market for a good Bluetooth speaker you can just prop up so you can crank music while you work, or let the kids catch up on the latest Pixar film and actually be able to hear it, then the Sound Cover is a very nice option.

You can find three finishes — silver, black, and gold — for the iPad Sound Cover to fit your iPad Air at the Onandoff website or our affiliate Amazon for $199. Thanks to the company for sending a press sample to CMT.