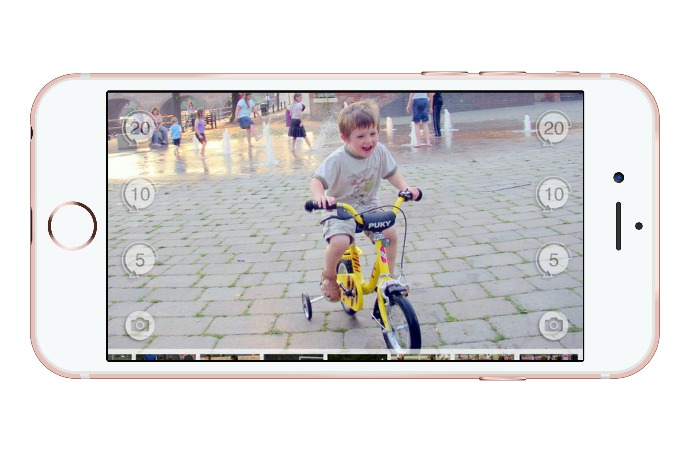 If you’re into taking video, have I got a reco for you! It’s AfterCam, a sort of “after-the-fact” video recorder that helps you capture the past 5, 10, or 20 seconds in time without clogging up your phone with tons of extra video data. And, for Memorial Day weekend only, it’s free to download.

You know this scenario:  Your kid is about to do something cute, or momentous, or surprising–or all three–but you aren’t exactly sure when to start recording it on your phone. So you start recording looooong before the recorder solo starts or the first step actually happens and end up with tons of video you’ll need to edit down…someday.

Or, you fumble to start recording too late and miss the whole thing. Sigh.

That’s why I am smitten with AfterCam for iOS. (Sorry Android users.) Hold your phone up as if you were recording and the app will start capturing — but not saving — all the action. A small red blinking lets you know it’s doing its job. You can even zoom in and out with a pinch of the fingers.

Then, once your son triumphantly jumps off the high diving board, or your daughter kicks the ball right between the goal post, or your baby takes those first two steps, you can tell AfterCam to save the last 5, 10, or 20 seconds of the action with the touch of a button. And, voila! Your video is saved to your phone, no editing needed.

Of course, if you’re trying to record an entire scene from your son’s play or your daughter’s black-belt karate exam, regular video is still best for recording big chunks of time. But for those shorter, harder-to-capture moments in time, AfterCam is such a cool app to have on your phone.

Download the smart and useful AfterCam app for iOS for free over Memorial Day weekend 2016, and capture all those important moments after they’ve just happened.