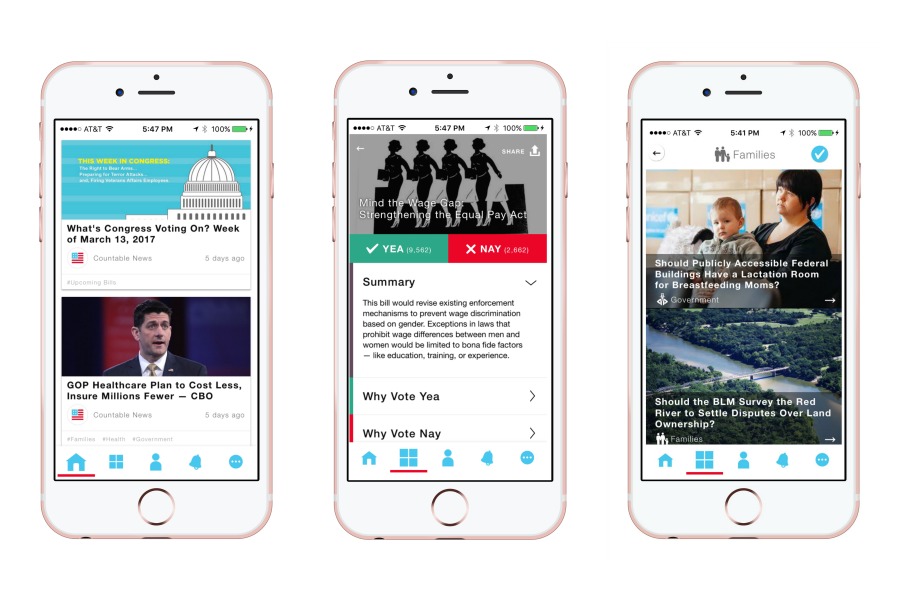 It’s amazing to see just how quickly some fantastic app developers have created political apps to help more people get involved in the political process, connect to your elected representatives, and make a difference, one voter at a time.

The truth is, signing petitions or form letters may make you feel good (especially when you share the info on Facebook), but they’re about the lowest impact action you can take. Some petitions are actually little more than fundraising efforts for organizations or even politicians.

The most effective thing you can do to register concerns is to show up in person at meetings or town hall events; or to schedule an appointment directly.

But hello, reality? Not all of us have that kind of time.

So we’re happy to share these 3 terrific political apps and digital services that get the job done effectively without hours of effort.

(Though of course I have to add the disclaimer: when you contact your elected representatives, please be polite! As passionate as political issues can make us, you’ll be far more effective if you don’t come across like a crazy ranting troll.)

This service isn’t an app, though it does work with your messaging app. And it’s wildly easy.

You simply text RESIST to 50409 and it will walk you through the process. Essentially you type a text message about your concerns, and they’ll automatically turn it into a letter format, then fax it directly to your two senators. Evidently they’ll be upgrading the app soon to include your congressional representatives as well.

The folks behind Resistbot have confirmed the faxed messages are received and read by actual congressional staffers, which is awesome considering all you did was write a text.

This political app (iOS and Android; also at very top) and website has been around for several years now, and gets high marks from lots of our own contributors as a simple way to stay updated on the issues you care.

Countable lets you browse trending issues and bills, providing non-partisan summaries and pro/con arguments so you can make up your own mind — but there’s also a community feature, should you want to hear what others are thinking or have some respectful debates.

You can sign up for alerts about specific votes coming up in congress day to day, so that you can make your voice heard in a timely way. And you can see how your position aligns with your lawmakers’ own votes, so that you can determine whether your interests are being represented well.

But the best part of Countable might be the ability to send actual emails or, better yet, video messages to your elected officials.

Sharing your story on video about how military day care or insurance benefits have impacted your own family? Wow.

That degree of personalization is incredibly compelling.

This fairly new organization, with apps for iOS and Android, is making it easier for more people to get involved with the political process by asking you to set just five minutes aside each day to make 5 calls to your local and national elected reps.

Considering that phone calls are the most effective method of registering your support or concerns short of in-person meetings, it’s really smart that they’ve put technology to use to facilitate the process.

5 Calls will provide the phone numbers and scripts for you — great for those of you who aren’t “phone people” — and a background on the issues so you can get a little more info on them if you need. It also takes a page from phone banking programs, allowing you track whether you spoke with someone in person, left a message, or couldn’t get through, so you can try again later if you’re inclined.

The org has been getting raves for helping tens of thousands of ordinary Americans stay motivated and active in the political process, as they start factoring those 5 calls into their daily routines.

Just be aware that this app is decidedly more liberal than the other political apps featured here. That said, many of the issues I’ve seen promoted — nutrition standards in schools, climate change policy, concerns with the Affordable Care Act replacement — are definitely concerns that impact us all, whatever your political leanings.