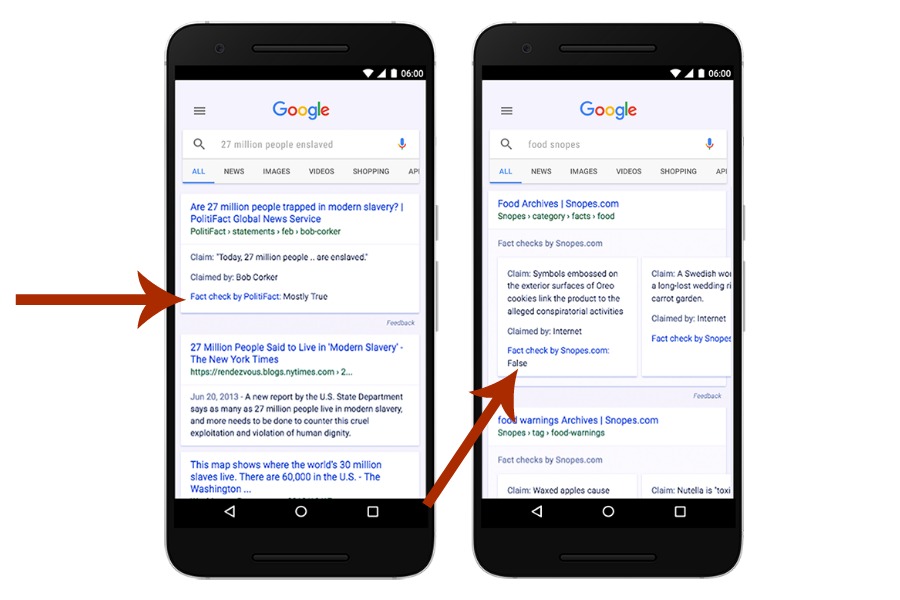 It seems like an April Fool’s joke (and yes, I double checked the date on the post) but at long last, Google is taking moves to quash fake news with a new Fact Check feature in Google Search and Google News, worldwide.

So basically, Google Fact Check is not itself fake news. That’s a relief.

According to the recent post on the Google blog, publishers can now enable a “Fact Check” tag in Google News which will mark as news those articles that have been fact-checked by publishers and respected fact-checking organizations, like Politifact,  FactCheck.org and Snopes.

It even includes fact-check sites like Climate Feedback which have very specific focus. Nice.

Related: 3 of the best political apps to help you have your voice heard

Politifact, one of the sites that supports the new Google Fact Check

Hey, if you’re going to go all confirmation bias conspiracy theory, none of this will matter for you anyway. (She did too give birth to an alien baby with George Clooney!)

But in a skim-the-headlines-only world where we don’t want to dig much past the first page or two of search results for information, this is a terrific step toward helping Google to give authority to legit sites with real information.

Plus, it’s so smart for our kids who aren’t yet quite so media savvy. My own sixth grader has been studying how to differentiate real from fake news in school and I imagine for her generation, it will be massively helpful in pushing kids to look at Internet headlines more critically.

On the other hand, this really is still a skim-the-headlines-only solution; the brief fact check info that appears, according to the sample Google screenshot above, still requires some deeper diving to understand the complexity of “mostly true” statements, let alone the other ranking systems fact-check sites use, like the Washington Post’s Pinocchios,  or AZ Central’s 0-4 star system.

And even Google cautions that the 115 fact-check organizations may even come to different conclusions.

It’s also important to know that trusted sources in the first place will be “determined by algorithm” and not humans, which could conceivably leave room for error, if not bias. Though I’m hopeful.

RIP It’s true, I saw it on the internet!

Visit the Google Blog for info on Fact Check now in Google Search and Google News whether you’re a reader or a publisher, and see more in the Google Help Section.