A first look at the new Star Wars drones from Propel. Get ready for the holiday tech gift of the year. 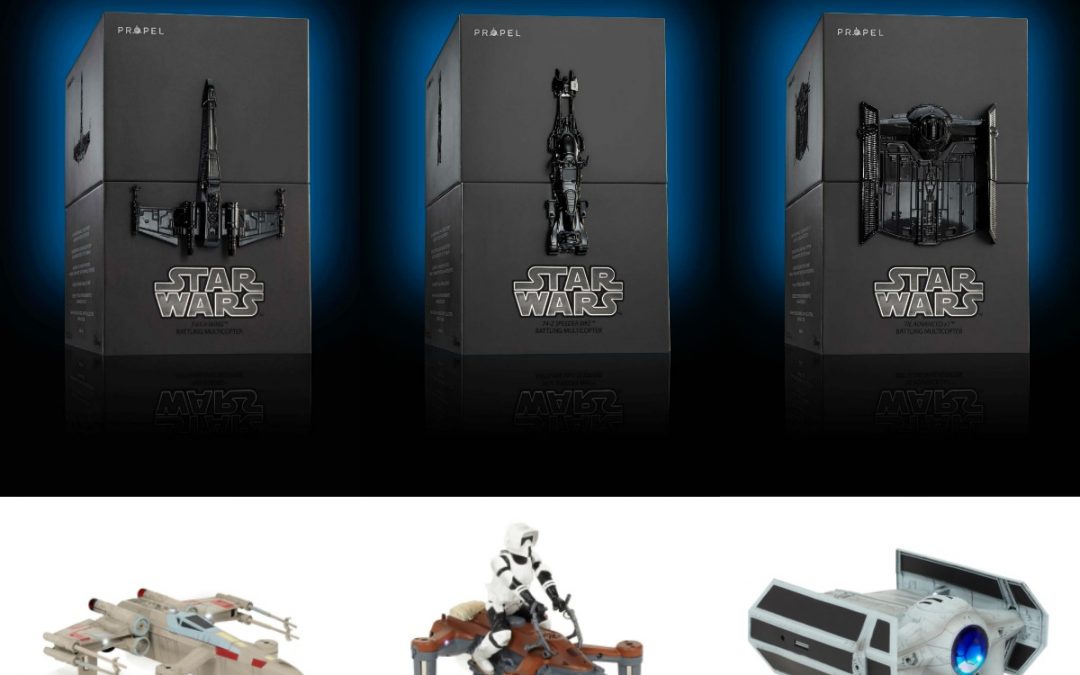 Each year, there’s one tech gift that we see and go…yup. That’s going to be the one everyone wants. And this year it’s the new Collector’s Edition Propel Star Wars Drones that I got to check out at a top secret press preview event this week and are available for purchase starting tomorrow.

There are three drones, each meticulously recreating Lucas’ vision for a Tie Fighter, X-Wing, and Speed Bike, but the technology behind each is pretty outrageous. 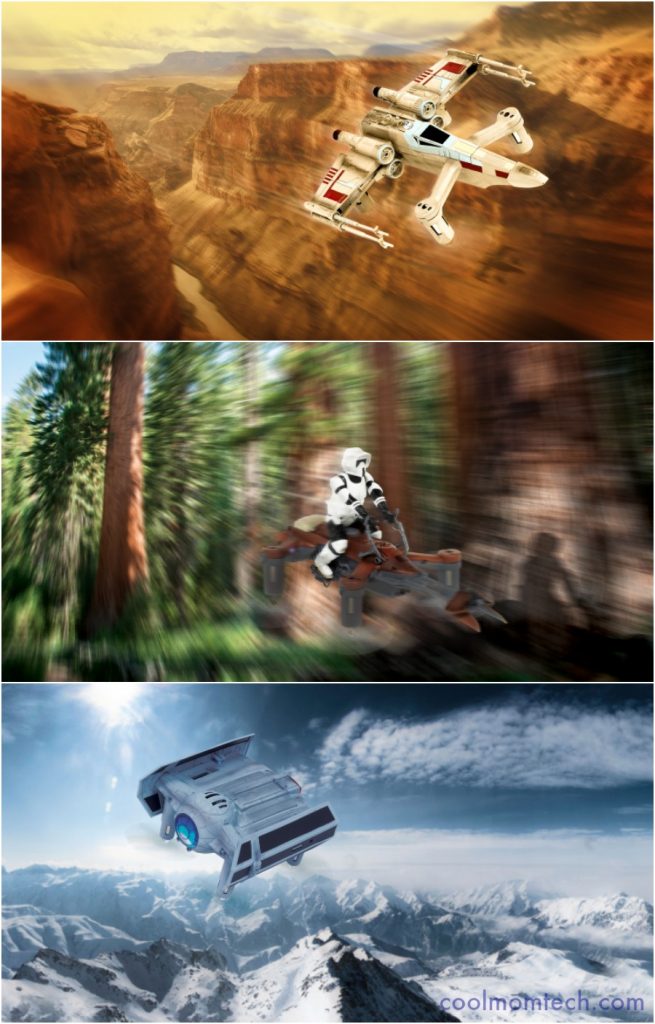 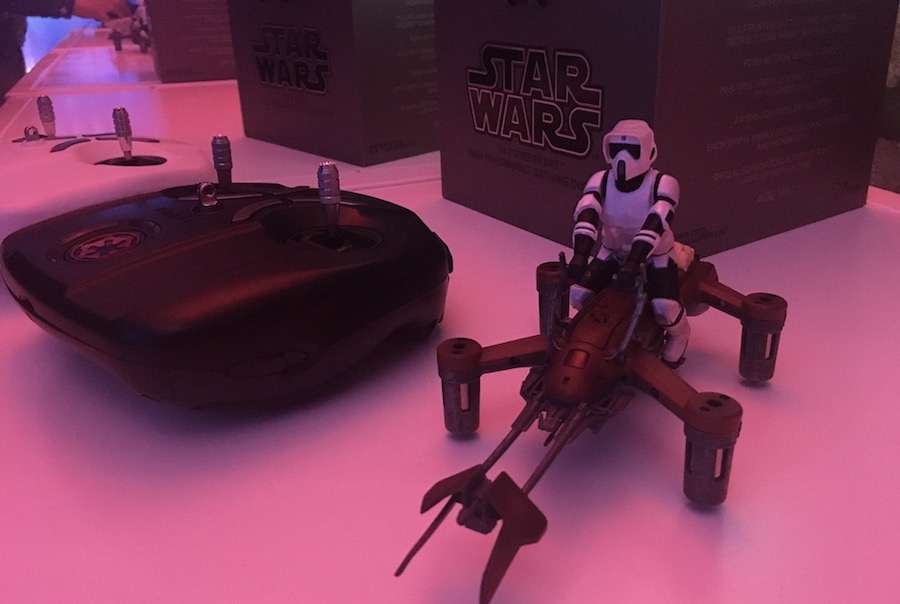 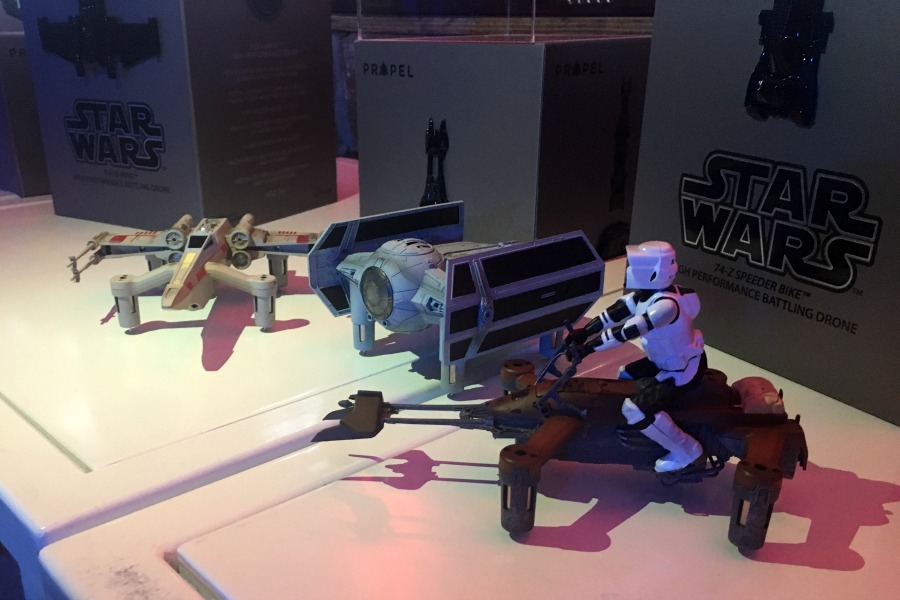 They’re designed not just to move, fly, and barrel roll the same way the real Star Wars crafts do (and that took an insane amount of engineering), but you can send them into battle with up to 12 drones at a time, thanks to four wireless networks working simultaneously inside each drone, a CPU offering endless game patterns, and LiFi technology — think WiFi, only with light. So it’s basically transmitting data 100 times the speed of WiFi, using light communication.

You also get about 8 minutes of continuous play on a charge which isn’t too bad. And while the tech nerds among you may not be overly impressed by a 2.4 GHZ controller, I think it makes up for it in other ways.

On Facebook, we’ve got a video of them in action.

What’s great for drone experts and newbie flyers alike is that the Propel Star Wars drones offer two different gaming experiences in one.

Plus, it’s harder landing these thing than you think. (Though my 10 year old got it down pretty quickly. As 10 year olds are wont to do.) 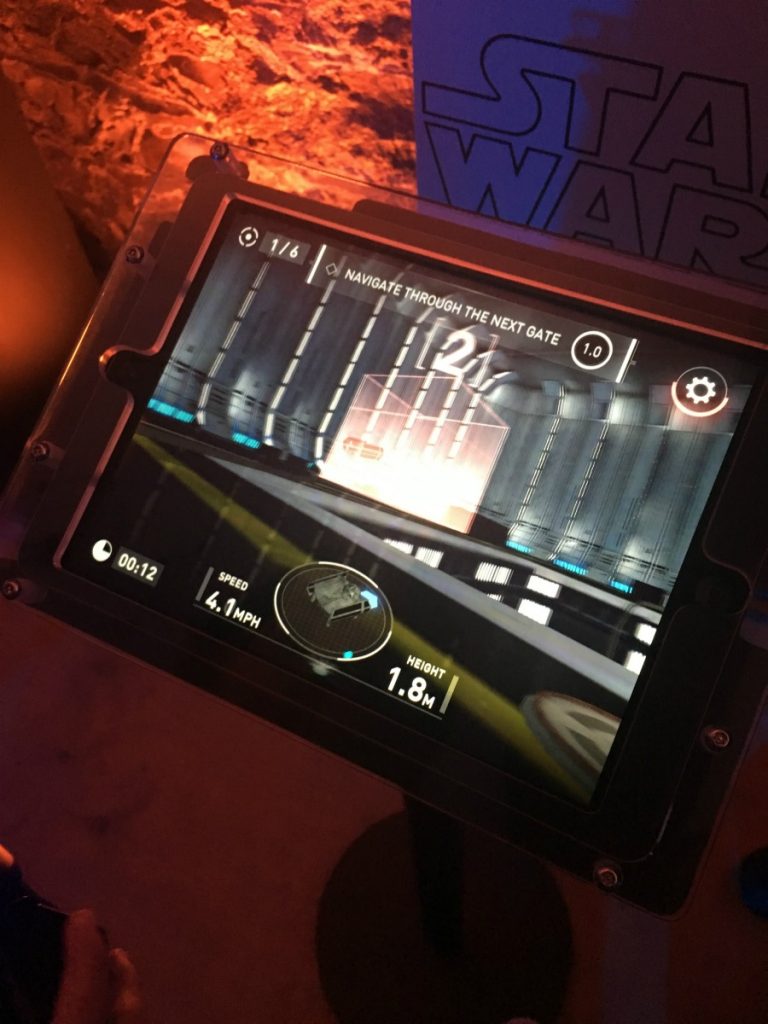 Once you’ve mastered the virtual missions, you can start flying the real drones.

That’s when you discover all kinds of cool surprises, sounds, and Easter eggs — a little encouragement from Han himself while you’re taking on a Tie Fighter is never a bad thing.

Related: 7 cool things you can do with MiniDrones. You know, beyond flying them into trees. 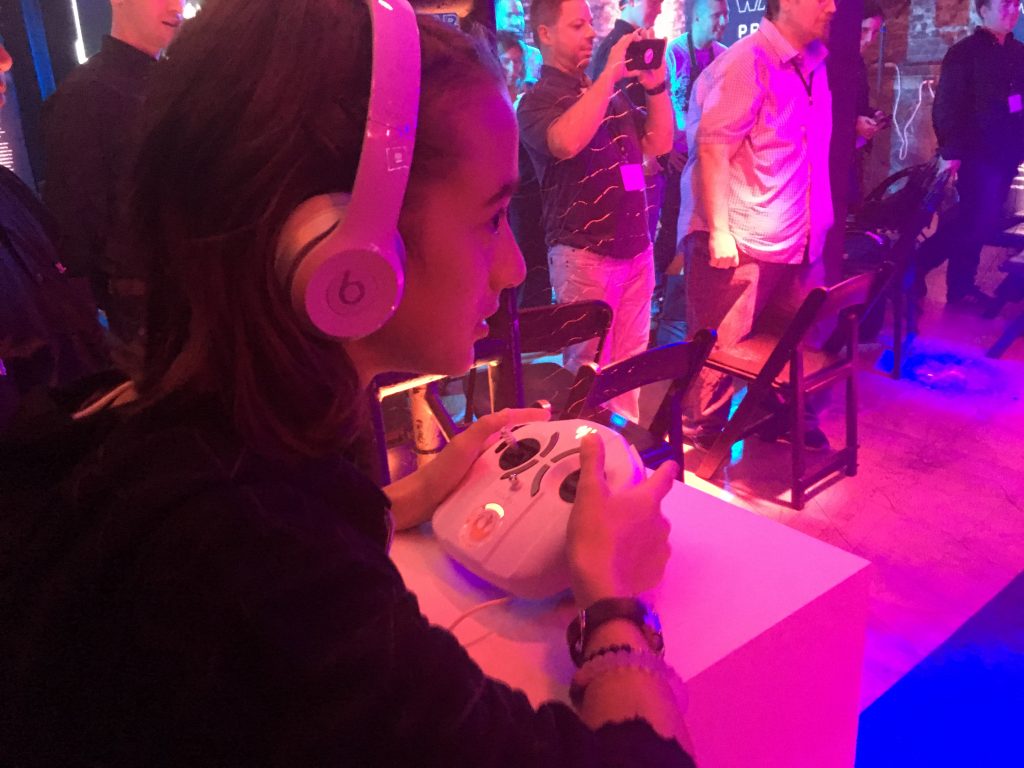 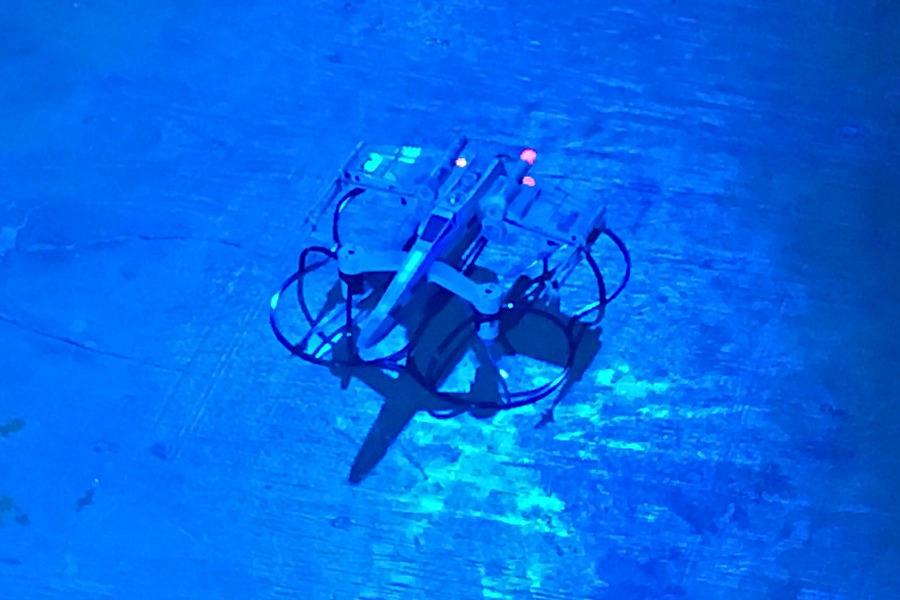 My 12-year-old daughter, the X-Wing pilot

As a parent, I also appreciate a lot of the safety functions built into the Star Wars drones. Like the sensors will shut down the drone in an instant if it comes too close to a person. In training mode, the max height is limited so you don’t lose your shiny new Star Wars drone to your backyard tree. And the use of class 1 lasers pose no risk to your kids, your neighbors, or (eep) passing aircraft.

Propel’s goal is to create a global drone battle community, complete with in-person events, tips for parties you can host yourself (#SquadLeaderGoals), even big sponsored competitions a few times a year complete with cash prizes. Mercenary flyer that you are.

So let’s talk prices. The special Collector’s Editions seen here, complete with the fancypants packaging with a wax seal that lights up when you unbox it is $179. 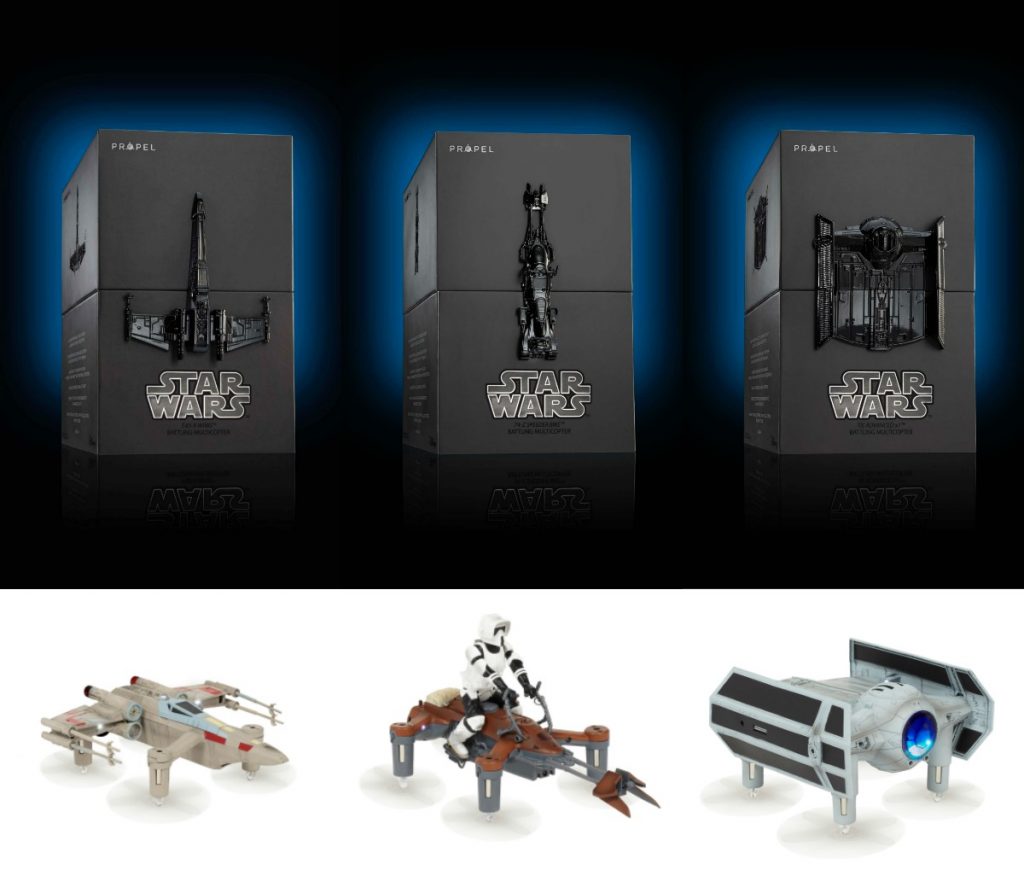 It’s a “limited edition” meaning 350,000 of them, but if you’re a collector, grab a couple from Target, Best Buy, JCPenney, Barnes & Noble, and a lot more shops starting September 1.

If you don’t need the fancypants packaging, wait a few months for the regular Star Wars drones which will be just $149 in time for the holidays. Because if you have kids like mine — well, you might just need more than one.