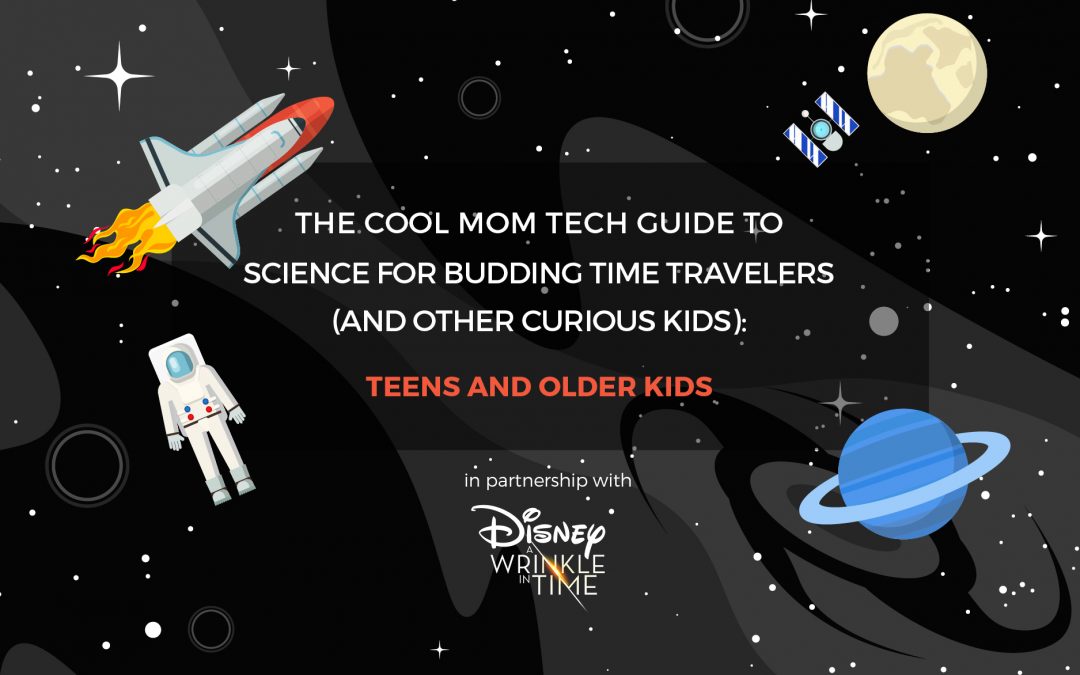 While kids are born to love science, every kid at every age has different abilities, inclinations, passions and skills. We started Cool Mom Tech in part to help parents foster that love of STEM in their kids, which is why we couldn’t be more thrilled to bring you this five-part science guide for kids on behalf of our truly amazing sponsor, Disney’s A Wrinkle in Time, now available on Digital & Movies Anywhere, and on Blu-ray June 5.

If anything is going to get kids excited about concepts of science, from the basics to, you know, bending space and time, it’s going to be Meg, Charles Wallace, Calvin, The Murrys and those awesome Mrs.’s.

In this guide you’ll find:

So we hope you’ll enjoy this science guide, developed with the help of experts and educators, which can help your kids get some more learning out of the film, bring some of the exciting science concepts to life — though no time travel just yet, sorry — and help your own kids find their own paths.

Because we know all kids are capable of doing the extraordinary.

Keep an eye out for other posts in the Cool Mom Tech Guide to Science for Budding Time Travelers (and Other Curious Kids) just for kindergarteners, grade schoolers, and tweens too. 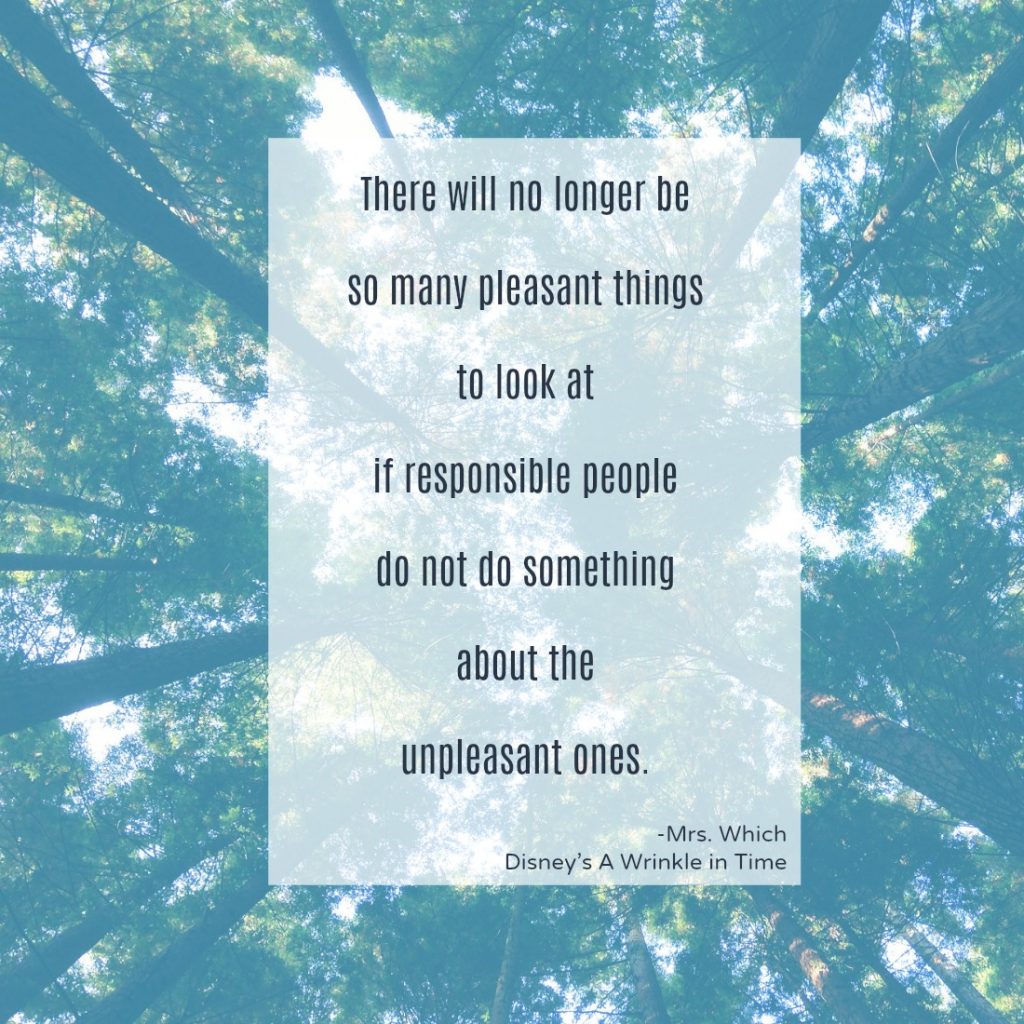 Obviously, a 13-year-old isn’t the same as a high school senior. But teens of all ages do share a whole lot of skills and attributes that can be nurtured and encouraged through age-appropriate science activities.

Teens have more mature thinking skills, which means they can think more about the future, envisioning their place in the world, how they fit in, and who they want to be.

While younger kids ask, “why?” Teens are amazing at asking, “What if…?” And all this abstract and creative thinking is coupled with a more developed moral core, and a strong sense of right and wrong.

Teens are also becoming “specialists,” in a way, with increasingly clear knowledge of what kinds of ideas they like, what issues and subjects they care about, and what they want to accomplish, both in the short-term and in the long-term.

And while teens are risk-takers (as every parent of a teen who has ever lost sleep over them well knows!), we have the ability to channel that willingness to try new things and push boundaries into something positive. Especially when it’s applied to scientific thinking. 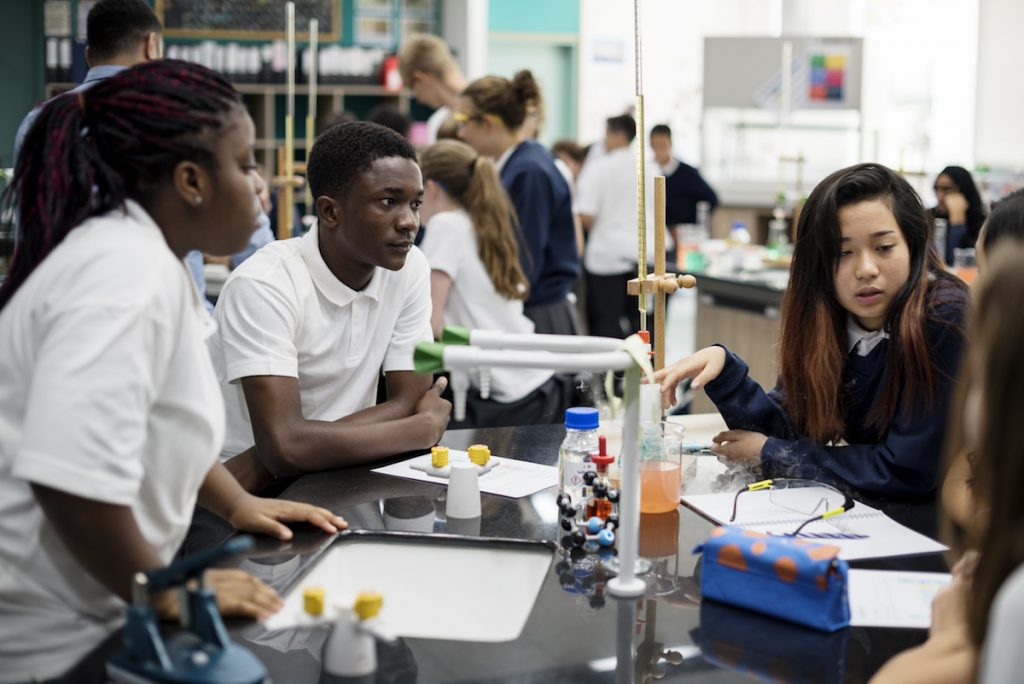 As teens, our children are coming up with their own ideas that, frankly, will probably surpass our own. And that’s awesome. So what they need right now, more than any kitchen table projects (though they do like those too), are opportunities to flex their intellectual muscles for a greater audience, with higher stakes, with more potential reward.

Fortunately, there are tons of opportunities for teens in this arena. What’s best is that these contests don’t just give kids science practice, but they give kids the greater ability to solve problems as responsible, conscientious citizens and even make the world a better place to live. Or as Mrs. Which puts it, There will no longer be so many pleasant things to look at if responsible people do not do something about the unpleasant ones.

Science Activity for Teens: Find and Enter a STEM Contest

So maybe our teens won’t come up with a way to bend the laws of physics to time travel through a fifth dimension and present it to an entire auditorium of scientists….or maybe they will.

Let’s give our teens and older kids every chance to challenge themselves to solve problems using science, to help people, and to make this world the one they want to live in. After all, it will be theirs soon enough.

For this activity, the goal is to research STEM-themed contests around the country that can help teens win accolades, scholarship money, internship opportunities — maybe even a chance to bring their very own ideas to life.

Nothing like a little nudge through friendly competition put those creative minds to work for good.

Wow, there are a lot of STEM and science-specific contests out there for teens, both nationally and internationally. Consider these a jumping-off point. 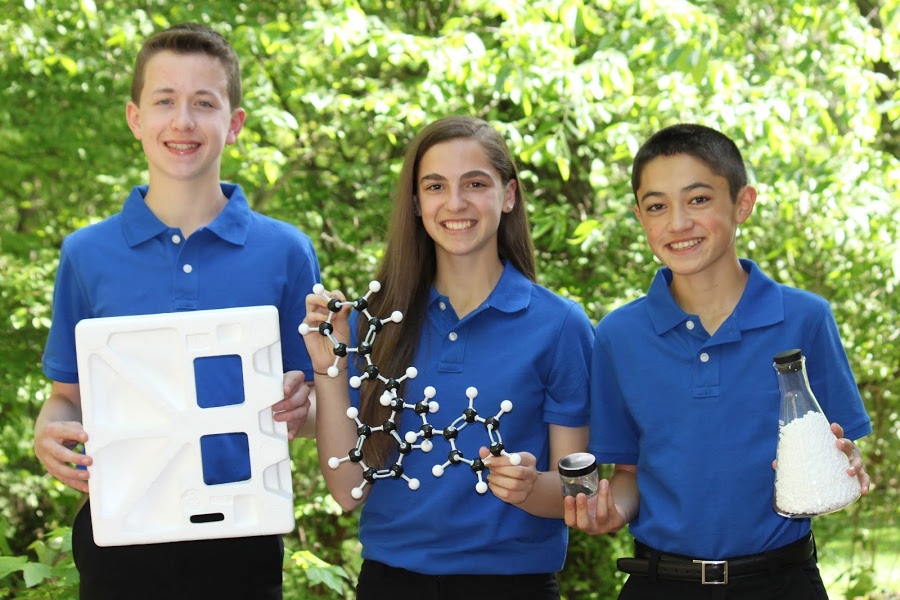 Google Science Fair
This annual online competition for teens 13-18 kicks off in September. One Google Science Fair Grand Prize winner receives $50,000 in scholarship funding and there are plenty of other prizes thanks to partners like LEGO Education, National Geographic, Scientific American and Virgin Galactic.

Check out the previous winners and finalists for inspiration, including the impressive team of Columbus, Ohio 14-year-olds shown above who won the Scientific American Innovator Award for their idea for fighting foam waste with recycled filters.

The Imagine Cup
Microsoft’s annual global student STEM competition is specifically for teams of computer science students to create the most original new applications. It’s a massive contest, with thousands of entrants each year. World Finalist teams win all-expenses paid trips to the finals and cash prizes up to $100,000. Last year’s winning app: a cloud-connected glucose meter designed for children with diabetes.

Intel International Science and Engineering Fair
School and local science fair entrants of high school age compete from around the world for $5 million in total prize money at the ISEF. This is a massive global contest.

Generation Nano
Keep an eye out for next year’s competition from the National Science Foundation; this year, middle school and high school entrants created a comic or a video bringing to life a science-powered superhero of their own creation. Winners receive travel and tickets to the National USA Science & Engineering Festival in DC, and cash prizes for each team member. (And the call to entries video from Stan Lee was pretty cool!) 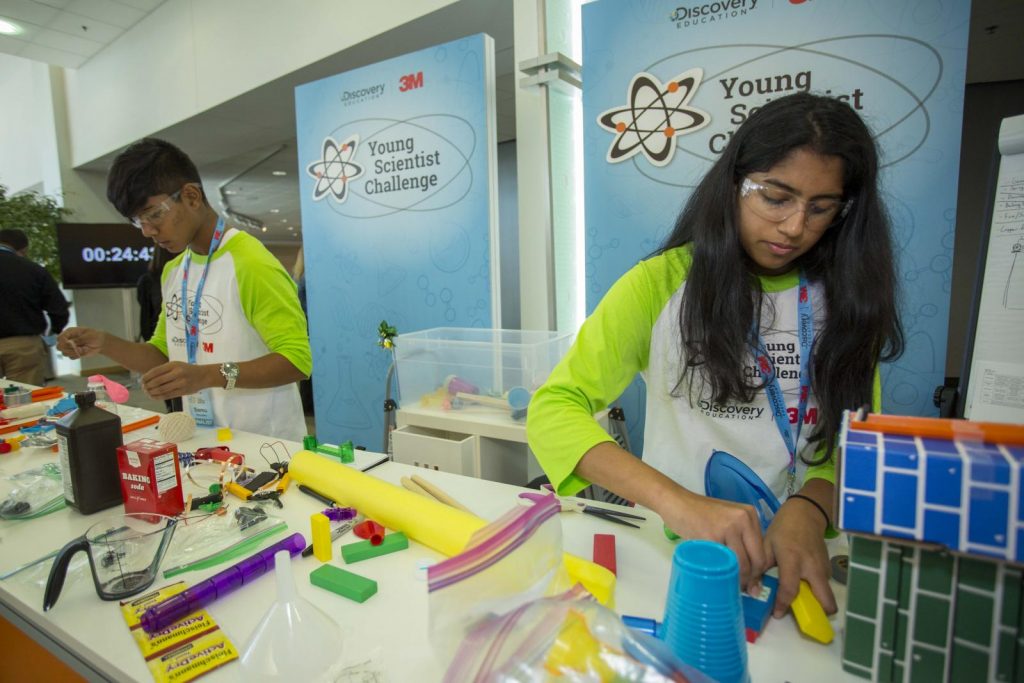 Discovery Education 3M Young Scientist Lab
Specifically for young teens up to grade 8, entrants submit a 1- to 2-minute video describing a creative solution to an everyday problem. Based on their passion, innovation, ingenuity and presentation skills, they have the chance to appear in the live finals, to win a professional science mentorship, a TV appearance, and $25,000.

The Paradigm Challenge
This $100,000 contest encourages kids up to 18, in three separate age groups, to “use kindness, creativity and collaboration to help solve real-life problems” around topics as diverse as home fires, waste reduction, and food security.

NSTA ExploraVision
A project of the National Science Teacher’s Association and sponsored by Toshiba, this contest offers kids up to age 18 the chance to show off their creative thinking by applying STEM knowledge to real world problem-solving. The goal is to invent a new technology that can be used 20 years in the future. There are plenty of prizes, including a $10,000 savings bond for students on each of four first prize winning teams.

We think talking to your kids about movies they love is a great way to bring it to life, to make it even more meaningful, and to connect as a family over shared interests.

Here are a few questions that are perfect for to get teens and older kids thinking, after watching Disney’s A Wrinkle in Time,now available on Digital & Movies Anywhere, and on Blu-ray June 5. 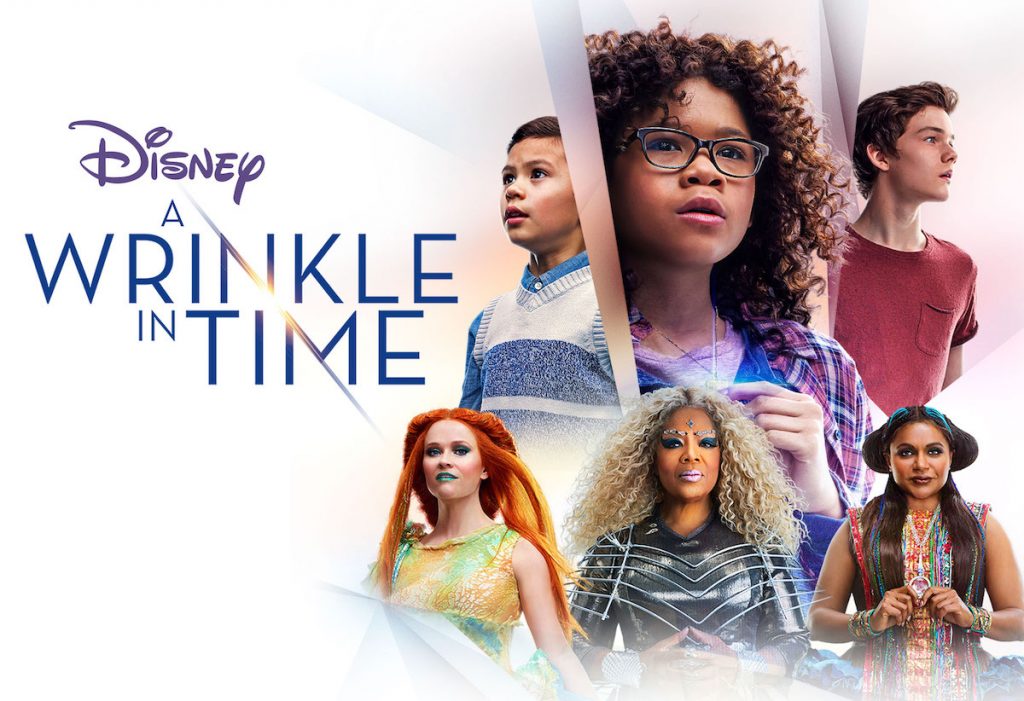 -What were the main themes of the film?

-What was the most powerful moment of the film for you?

-What are some of the characteristics of the protagonist, Meg? How are you alike and how are you different?

-What are some of the struggles that Meg faced? How did she overcome them?

-While the film is science fiction, what aspects of the story feel most like real life?

-Do you think that time travel will ever be possible? Why or why not?

Resources and opportunities for more learning: 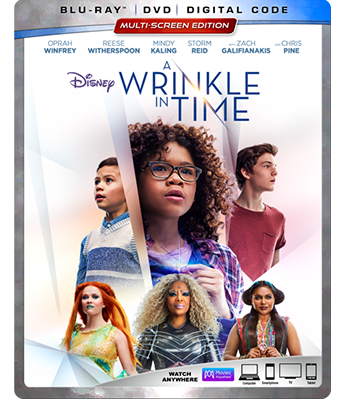 Thanks to our fantastic sponsor, Disney’s A Wrinkle in Time, now available on Digital & Movies Anywhere, and on Blu-ray June 5. We hope it helps bring the magic — and science — to your family!