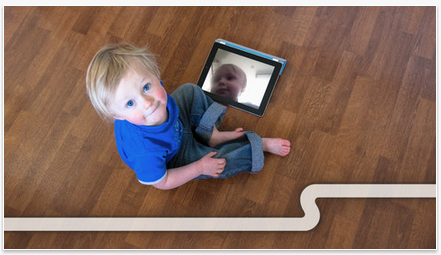 When you hand your precious iPhone or iPad over to someone who still eats Play-Doh, it’s a fair bet that he may delete your favorite game or take 100 photos by accident–unless you give him something he can play with on his own.

We all know about apps like Cupcakes! and every new iteration of Angry Birds to keep young kids occupied. But here are three super fun apps you might not know, that should hold a preschooler’s interest long enough for you to actually catch his older sister making that goal.  –Christina

My kids love taking videos of themselves and _shift builds on that love in a unique and really different way. At first my kids thought they were just looking at themselves on the iPad; I could hear them saying, “this app doesn’t DO anything?” But then…they noticed the delay.

Turns out with _shift, they weren’t really looking at themselves in the iPad live, but from a few seconds ago.

PHLIP looks a lot like a regular puzzle game that uses pictures from your own photo roll or a photo of anything nearby. But, instead of scrambling the pieces across the screen, the picture is split into 4, 9, 16 or 25 squares that “flip’ to another orientation. To turn a piece another way, you actually turn the iPad itself, then tap the piece when it’s right-side up.

Young kids will love seeing their photos flip into place, though keep in mind that it is smart to make sure all pieces have part of the image in it or you’ll never know when it’s flipped to the right position. And since your kids will be twisting your iPad or iPhone this way and that, have them do it over a soft surface, okay? ($.99 for iOS)

Though not as physically satisfying as popping bubble wrap, POPtastic is still a lot of fun for little ones (and their older parents). The premise is simple: Just pop the bubbles as they come across the screen, avoiding the black skull heads and trying to pop the bubbles with extra points inside of it.

Unlike some other “pop the bubbles” apps, POPtastic has no in-app purchases or ads running across the screen. Plus, I find the scores to be somewhat of an afterthought and not something to be taken seriously. It’s just fun to pop. ($.99 for iOS)

Check our archives for even more fun apps for kids.