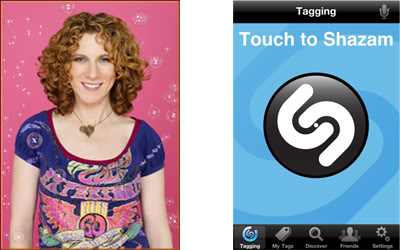 We’re beyond excited to launch Oh Appy Day!, a brand new feature here on Cool Mom Tech that will give you the scoop on the coolest apps from some of the coolest people anywhere.

Shazam is great if you’re listening to regular old radio or maybe hear a song on television and can’t remember the name or wish you knew the artist.  As long as you are listening to a recording of a song (it does not work if you just sing into it!), you just point your phone at the sound and touch the Shazam tagger button to find out what the song title is, who the artist is, and what album it’s from. –Laurie

Purchase Shazam for your Apple gadgets at iTunes.com, and today only, it’s free for Android users at the new Amazon App Store!

Find the latest and greatest from the Laurie Berkner Band, including tour dates, appearances, and CDs at their website, plus check out their own awesome Laurie Berkner Band app! You can also catch Laurie speaking with our own Editor-in-Chief Liz Gumbinner at the upcoming industry conference, Kindiefest.