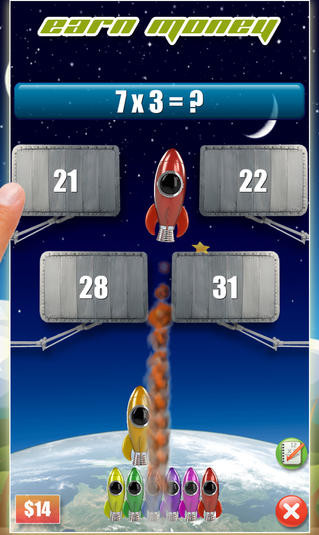 During these long, unscheduled, fun-in-the-sun summer months, I’ve been on the lookout for some smart apps that keep my kids’ brains thinking and not turning into soft serve. That’s a big reason why I am so excited about this math app which we all think is out of this world.

In fact, my kids don’t even mind that they are doing math (math!) in July.

Rocket Math was created by Dan Russell-Pinson, the same developer that brought us the cool Stack the States and Presidents vs. Aliens. But, instead of answering geography questions or presidential trivia, Rocket Math focuses on drilling math facts. And, yes, this is really fun.

To get started, you need to build a rocket which can be as normal or as outlandish as you’d like it to be — like, a London telephone box for the body?  I tend to go for realism, but my six year old has made some crazy contraptions that don’t always fly; they just bounce along the ground. He finds this hilarious.

After building the rocket, it’s time for a math mission. Questions can be scaled up or down with six levels from Beginner to Genius, and let’s just say that the top two levels are for someone with much quicker math-recall skills than I. But, there are plenty of questions for the youngest ones too, from number identification to basic computation.

All the doodads on the rockets will cost you, but I was so relieved that this doesn’t mean I need to cough up any more money to buy points (I hate that!). Instead, kids earn money by — you guessed it — doing more math! Whee!

Even my math-phobic ten year old loves this game, and for that, I’m over the moon.-Christina

Rocket Math is available for the iPhone and iPad for only four quarters minus a penny.